How Does the Blockchain Work?

How Does a Blockchain Work?

The transaction process in a blockchain can be summarized as follows:

1. Facilitating a transaction: A new transaction enters the blockchain network. All the information that needs to be transmitted is doubly encrypted using public and private keys.

3. Formation of a new block: In a typical blockchain network there are many nodes and many transactions get verified at a time. Once the transaction is verified and declared a legitimate transaction, it will be added to the mem pool.  All the verified transactions at a particular node form a mem pool and such multiple mem pools form a block. 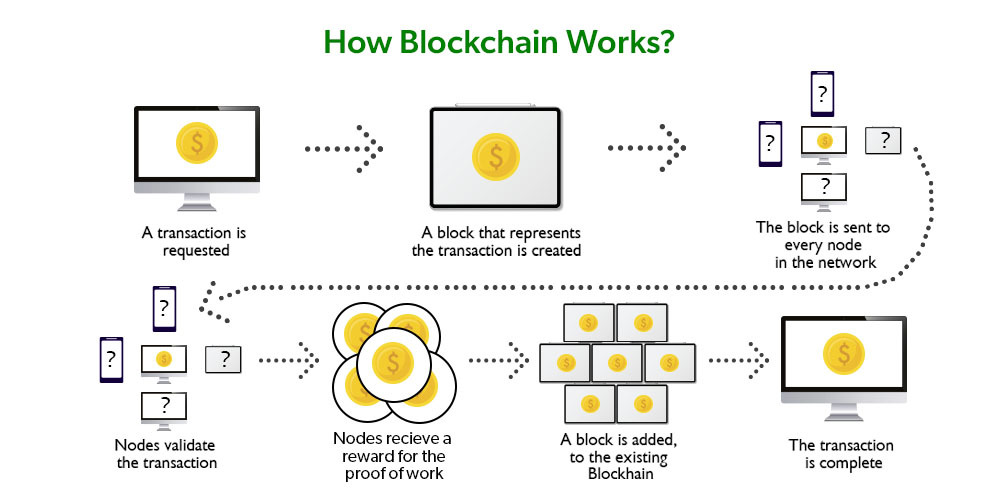 Let’s understand this working of blockchain with the help of an example:

Let’s say Jack and Phil are two nodes on the bitcoin blockchain network who wants to carry out a transaction between them.

Step 1: Facilitating the transaction: Jack wants to send 20 BTC to Phil via the Blockchain network.

Step 4: Consensus algorithm: Since here we are talking about bitcoins so the Proof-of-Work consensus algorithm will be used for block verification. In proof-of-work, the system assigns the target hash value to a node, and according to this, it must come up with a hash for the new block. The node has to calculate the hash value for the new block that is less than the target value. If two or more miners mine the same block at the same time, the block with more difficulty is selected. The others are known as stale blocks. Mining usually rewards miners with blockchain currency. In this case, the blockchain currency is bitcoin.

Step 5: Addition of the new block in the blockchain: After the newly created block has got the hash value and authentication through proof-of-work only then it will be added to the network and the transaction will mark as complete. Phil will receive 20 BTC from Jack.
The new block will be linked to the open end of the blockchain.

In the most basic way, one can think of a blockchain as a linked list. Each of the next items in the list is dependent on the previous item, except for the first block, also known as the genesis block, which is hardcoded into the blockchain. In the blockchain, each block contains the hash of the previous block’s header and a hash of the transactions in the Merkle tree of the current block. In this way, each block is cryptographically chained to the previous block. Let’s understand with an example what happens when someone attempts to change a transaction or block data in a blockchain network.