How Does Evaporation Cause Cooling?

When you apply perfume to your body, it feels a little colder. The same may be said for acetone and water. This is a result of evaporation, or the transformation of materials from their liquid to vapor state. The only difference is how quickly the coldness is perceived. In the case of acetone, the area of your body closest to the liquid will cool the fastest. This is due to the fact that acetone evaporates faster than water or scent.

We dry our wet clothes after washing them by putting them in the sun, also we have seen that when water spills on the floor, it dries up after some time. But do you know what is the reason and why is this water? The answer behind this is the phenomenon of evaporation. In this article, we will discuss what is evaporation and what are the factors that affect evaporation, and how evaporation causes cooling in the body? So let us first understand what is evaporation?

Evaporation is a type of vaporisation that occurs on the surface of liquids and includes the transformation of liquid particles into gaseous particles. As a result, this process is considered to entail a change in the matter state of liquids.

Or in other words, Evaporation is a process in which a liquid changes into vapor without attaining it’s boiling point(or temperature). Evaporation only occurs from the surface the liquid.

The molecules of liquid are always in random motion and collide with each other and attain kinetic energy from the collisions. Now, some of them become so much energized that they leave the liquid and turn into gas and escape out. Thus, we can see the process of evaporation does not need boiling point to occur. It can occur at temperature much lower than the boiling point of the liquid.

The surrounding gas must not be saturated by the evaporating material. Depending on how the molecules of the liquid clash with one other, they transmit energy to each other. When a molecule at the surface uses enough energy to exceed the vapour pressure, the liquid particles will typically escape and enter the surrounding air as a gas. The energy taken from the vaporised liquid during evaporation lowers the temperature of the liquid, resulting in evaporative cooling.

Now, let’s understand the factors on which the rate of evaporation depends:

How Does Evaporation Cause Cooling?

Natural cooling is caused by evaporation. The basic concept is that in order for matter to change state, it must either receive or lose energy. When matter molecules shift phases from liquid to gas, they require energy to overcome their potential energy through kinetic energy. As a result, the liquid absorbs energy from its surroundings.

When energy is transmitted, the temperature of the material rises or falls depending on whether the energy is transferred from the substance to the surroundings or vice versa. There are, however, exceptions to this rule. Although the temperature of the material rises until the boiling point is reached during evaporation, there is no visible heat transfer.

The molecules of the material constantly absorb heat energy from their environment, cooling them until they approach the boiling point, at which point they begin to break away from the liquid and transform into vapour. Because there is no temperature difference until the evaporation process has been completed, i.e. the complete liquid is changed into vapour, the energy required for this phase change is referred to as the latent heat of vaporisation, implying that this heat will not affect the temperature interpreting on a thermometer.

During summer, we perspire (sweat) a lot due to our body’s mechanism of cooling by evaporation of sweat which takes heat from the body and makes the body cool. Cotton, being a good absorber of sweat, absorbs the sweat and helps in increasing the speed of the evaporation by increasing the surface area and exposing it to the atmosphere.

When we kept water on the earthen pot (matka), the water molecules evaporate from the several tiny pores of the pot. During this process, it takes the heat from the water and thus the water cools down due to the loss of heat. This is the reason why water kept in earthen pot keep cool.

Problem 3. We often sprinkle water on the ground or on the roofs during summers. Why?

Problem 4. We are able to sip hot tea of milk on a saucer rather than a cup. Give reasons.

Problem 5. Why does our palm feel cold when we put some acetone or perfume on it?

This is because of the working mechanism of the air cooler. The air coolers has an exhaust fan which sucks in the dry air of the room inside. In the cooler there is a pad that has been wet by water. The water evaporates from the pad by taking the heat from the dry air thus, in the process making the air cool. This cool air released from the air coolers which circulates inside the room. Thus, air coolers work on the principle of cooling effect caused by Evaporation. 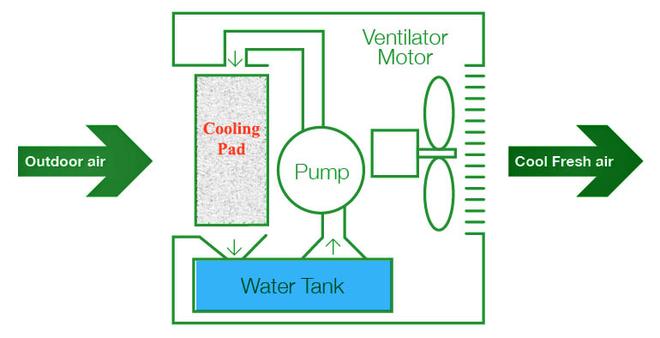 Problem 7. We feel cool when we apply hand sanitizers on our hand. Give reason why?

Problem 8. In summer our clothes dry up much quickly as compared to winter and monsoons. Why?