How Does Bitcoin Mining Work?

Bitcoin Mining is the process of verifying bitcoin transactions and storing them in a blockchain(ledger). It is a process similar to gold mining but instead, it is a computer process that creates new bitcoin in addition to tracking Bitcoin transactions. Let’s further study bitcoin and the various concepts related to it.

What is Bitcoin Mining?

Bitcoin mining is a computation-intensive process that uses complicated computer code to generate a secure cryptographic system. The bitcoin miner is the person who solves mathematical puzzles(also called proof of work) to validate the transaction. Anyone with mining hardware and computing power can take part in this. Numerous miners take part simultaneously to solve the complex mathematical puzzle, the one who solves it first, wins 6.25 bitcoin as a part of the reward. Miner verifies the transactions(after solving the puzzle) and then adds the block to the blockchain when confirmed. The blockchain contains the history of every transaction that has taken place in the blockchain network. Once the minor adds the block to the blockchain, bitcoins are then transferred which were associated with the transaction.

For the miners to earn rewards from verifying the bitcoin Transactions, two things must be ensured:

Why Do Bitcoin Needs To Be Mined?

Bitcoin is a digital currency where there are chances of copying, counterfeiting, or double-spending the same coin more than once. Mining solves these problems by making the above illicit activities extremely expensive and resource-intensive. Thus, it can be concluded that it is more beneficial and cost-effective to join the network as a miner than to try to undermine it.

Why Does Bitcoin Needs Miners?

Bitcoin miners are very essential for the smooth functioning of the bitcoin network for the following reasons:

There are several pros of mining a bitcoin:

How Does Bitcoin Mining Work?

The nodes of the blockchain network are based on the concept that no one in the network can be trusted. Proof of work is accepted by nodes to validate any transaction. Proof of work involves doing hefty calculations to find a 32-bit hash value called nonce to solve the mathematical puzzle. The miners create new blocks by abiding by the fact that the transaction volume must be less than 21 million. 21 million is the total number of bitcoins that can be generated. The verified transaction gets a unique identification code and is linked with the previous verified transaction.

Let’s understand this with the help of an example- 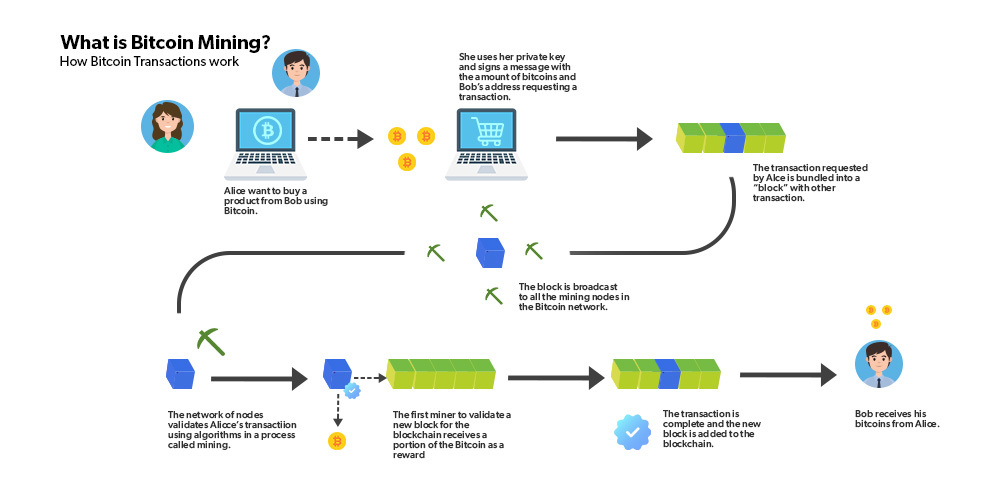 Requirements to Mine Bitcoin

In past, users of the system used to mine bitcoins using their home computers but as the technology has improved, this is no longer the case. The general time a bitcoin network takes to verify a new transaction is 10min. Within that time, there are more than one million miners competing with each other to find the hash value. When there is more computing power working together to mine for bitcoins, the difficulty level of mining increases. Therefore, in order to mine bitcoins, the user must possess-

How to Start Mining Bitcoin?

The following steps display the ways to mine bitcoins:

Previous
What is Bitcoin Cash?
Next
How Bitcoin Transaction Works?
Related Articles
1. Bitcoin Miners and Bitcoin Mining
2. Bitcoin vs Dogecoin - 7 Differences Between Bitcoin and Dogecoin
3. How does Ripple Protocol Consensus Algorithm work ?
4. How Does the Blockchain Work?
5. Bits about Bitcoin
6. Bitcoin's Monetary Policy
7. Where to Find and Buy Bitcoin
8. 4 Key Concepts of Bitcoin
9. What are Bitcoin Mitigating Attacks?
10. Different Ways to Convert Bitcoin to Fiat Currency
Article Contributed By :