How does a C program executes?

Whenever a C program file is compiled and executed, the compiler generates some files with the same name as that of the C program file but with different extensions. So, what are these files and how are they created?

Every file that contains a C program must be saved with ‘.c’ extension. This is necessary for the compiler to understand that this is a C program file. Suppose a program file is named, first.c. The file first.c is called the source file which keeps the code of the program. Now, when we compile the file, the C compiler looks for errors. If the C compiler reports no error, then it stores the file as a .obj file of the same name, called the object file. So, here it will create the first.obj. This .obj file is not executable. The process is continued by the Linker which finally gives a .exe file which is executable.

Linker: First of all, let us know that library functions are not a part of any C program but of the C software. Thus, the compiler doesn’t know the operation of any function, whether it be printf or scanf. The definitions of these functions are stored in their respective library which the compiler should be able to link. This is what the Linker does. So, when we write #include, it includes stdio.h library which gives access to Standard Input and Output. The linker links the object files to the library functions and the program becomes a .exe file. Here, first.exe will be created which is in an executable format.

Loader: Whenever we give the command to execute a particular program, the loader comes into work. The loader will load the .exe file in RAM and inform the CPU with the starting point of the address where this program is loaded. 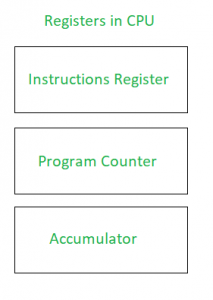 Difference between Linker and Loader

Related Articles:
My Personal Notes arrow_drop_up
Previous
c32rtomb() function in C/C++
Next
strtoimax() function in C++
Recommended Articles
Page :
C program that does not suspend when Ctrl+Z is pressed
06, Jun 17
Write a C program that does not terminate when Ctrl+C is pressed
07, Mar 13
Does C support function overloading?
06, Aug 09
Why Does C Treat Array Parameters as Pointers?
10, Jan 10
How does 'void*' differ in C and C++?
08, Mar 10
How does free() know the size of memory to be deallocated?
01, Jul 11
How does Duff's Device work?
10, Apr 17
Why variable name does not start with numbers in C ?
30, Aug 17
Why does sizeof(x++) not increment x in C?
08, Oct 18
What does main() return in C and C++?
26, Mar 19
How does Volatile qualifier of C works in Computing System
28, Jul 20
Why does empty Structure has size 1 byte in C++ but 0 byte in C
14, Jul 21
Does C++ compiler create default constructor when we write our own?
28, Jul 10
How does C allocate memory of data items in a multidimensional array?
03, Jun 22
Does overloading work with Inheritance?
03, Jan 14
C program to detect tokens in a C program
26, Aug 17
C program to print a string without any quote (single or double) in the program
03, Oct 17
C Program for Program to find area of a circle
27, May 14
Lex Program to remove comments from C program
26, Mar 19
Hello World Program : First program while learning Programming
25, Nov 19
C Program for Program to Interchange Diagonals of Matrix
05, Dec 21
C Program for Program for array rotation
10, Nov 09
C Program to Print the Program Name and All its Arguments
11, Mar 22
C Program for Program to cyclically rotate an array by one
23, Nov 21
Article Contributed By :