How do we hear?

Sound is produced from a vibrating object or the organ in the form of vibrations which is called propagation of sound and these vibrations have to be recognized by the brain to interpret the meaning which is possible only in the presence of a multi-functioning organ that is the ear which plays a huge role in catching and transferring these vibrations to the brain. In this whole process, an organ called as ear plays an irreplaceable role in stimulating the brain nerves. There is not even a single second in our life when we don’t hear any sound, even when no sound came from the environment we can hear our own sound of breathing which is possible only due to our ears which is one of the five sense organs of our body. From waking up to sleeping, we respond to everyone which is possible due to an incredible and so unique part of the body known as Ear.

For instance, whatever we hear whether it is of high pitch or of lower one like whether it is a child shout or a drum melody, our ear can recognize and work finely with any quality of sound waves. However, there’s an extreme limit to everything that’s why sometimes our ear can also be damaged due to long-term exposure of ear in a noisy place, etc.

So let’s study in brief the human ear, its structure, and its functioning:

Structure of a Human Ear 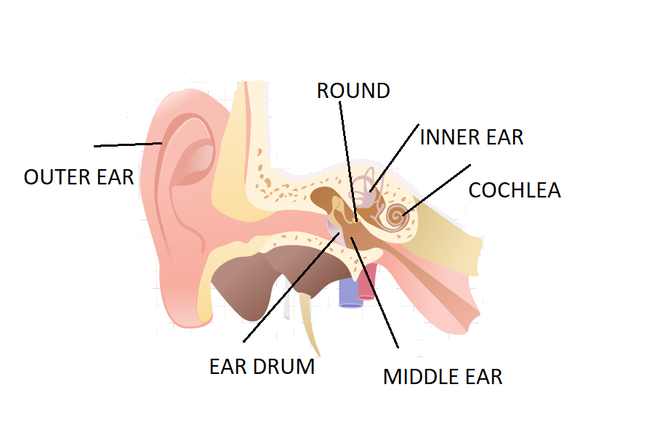 The shape of the outer part of the ear is like a funnel known as Pinna. Then, sound passes through the auditory canal. When sound enters it, it travels down a canal at the end of which there is a thin stretched membrane known as the eardrum. It is like a stretched rubber sheet. The vibrations are amplified with the help of three crucial bones (the hammer, anvil, and stirrup) in the middle ear. The lower part of the middle ear has a narrow Eustachian tube. In the inner ear, the pressure is converted into electrical signals with the assistance of the cochlea. These electrical signals are transferred to the brain via the auditory nerve so that the brain can perceive it as sound.

Working of the Ear

Hearing depends upon a continuous series of complex function that converts sound waves into electrical impulses. At first sound waves inter into our ear through a thin passageway known as the ear canal or auditory canal which will reach the eardrum. Now, the eardrum will get vibrate due to the arriving sound waves and will redirect these vibrations to three tiny bones in the middle ear. Now, these bones of the middle ear will intensify or will increase these vibrations and transmit it to the cochlea which is a snail-shaped structure filled with fluid, in the inner ear. There are a huge number of tiny hair cells present inside the cochlea.

Once the vibrations cause the fluid inside the cochlea to ruffle, a traveling wave formed across the membrane. Hair cells close by the wide end of the cochlea traces higher-pitched sounds, like a baby crying. Those near to the center discover lower-pitched sounds, such as a lion roar. As the hair cells move up and down, microscopic hair-like projections bend. This bending causes the channels, to open up. When that happens, chemicals rush into the cells, creating an electrical signal. And the auditory nerve carries forward these electrical signals to the brain, which convert them into a sound that we acknowledge and recognize.

How does Brain perceive the Sound?

The human sense of hearing is imputed to the auditory system, which uses the ear to collect, amplify, and transfer, and change, sound waves into electrical impulses that allow the brain to perceive and delimit sounds. Due to a chemical that rushes into the cells because of the movement of the hair-like projections known as stereo cilia which creates the electrical signals that are carried forward through the auditory nerve towards the brain, making it possible for the brain to get the signals and transfer them into a meaning that enables us to recognize and interpret what that sound coming from the environment wants to say.

Below is a structured diagram to show how the brain catches the sound waves:

Sound waves reach our ear by the following process.

How we hear the Sound?

We are able to react to everything this is because of the brain which carries the external signals or the messages and then understands the matter then reacts accordingly that’s why we react by speaking something after hearing. The brain covers the impulses from the ear into sounds which we will understand. The tiny hair cells in our inner ear transfer these electrical signals to the auditory nerve which is merged with the auditory center point of the brain where all the electrical impulses are perceived by the brain as sound. That’s how we hear the sound.

For example- whenever, we walk on the road and suddenly hear the sound of a car coming in full speed, although we aren’t able to see it or it is far away from our sight, still we will start walking along the edge as a precaution for the safety and this will not be possible if our brain and ear are not able to interpret and hear the sound respectively.

Problem 1: How can we feel the surrounding noise?

Every sound near us produces vibrations inside the eardrum and these vibrations are further leads to the electrical impulses following the inner ear which gets detect by the brain that’s why further perception process takes place in the brain, and we feel the sound.

Problem 2: Why it is found difficult to hear when we put a cotton ball in the ear?

Whenever we put the cotton balls inside our ear, it clogs or damps the ear path which decreases the amount of vibrations entering into the inner that’s why less the vibration goes less the transmission occurs resulting in difficulty in hearing.

Problem 3: During yawning, why we lose hearing?

During yawning, muscles around the middle ear contracts, that’s why we are not able to hear sometimes also loss our hearing power or capacity to hear loud sound.

Problem 4: What is the range of frequency of human hearing capacity?

20 Hz to 20 kHz is the hearing range of frequency of a normal person. Hearing higher than the hearing capacity can be harmful for a person’s health.

Problem 5: Which organs or parts of the body are used in the process of sound?

The function or process produced by organs or parts are:

Problem 6: To which part, eardrum sends the vibration?

Ear drum sends vibrations to the three crucial bones (the hammer, anvil and stirrup) in the middle ear.

Problem 7: Which part of the human ear indulges in stimulating the auditory nerve?