How Did Facebook Remove 2.2 Billion Fake Accounts in the First Quarter of 2019?

Ever heard of Facebook? Well, unless you have been living under a rock this past decade, I’m sure you have.
And in case you haven’t, Facebook is a social networking site that is used to share pictures, post comments on the aforementioned pictures, watch news (only if extremely bored!), chat live with people, watch short-form videos, etc. (Although you probably don’t do any of that since you live under a rock!!).
Weird living accommodations aside, we are here to discuss the crazy fact that “Facebook Removed 2.2 Billion Fake Accounts in the First Quarter of 2019”. So let’s focus on that now. 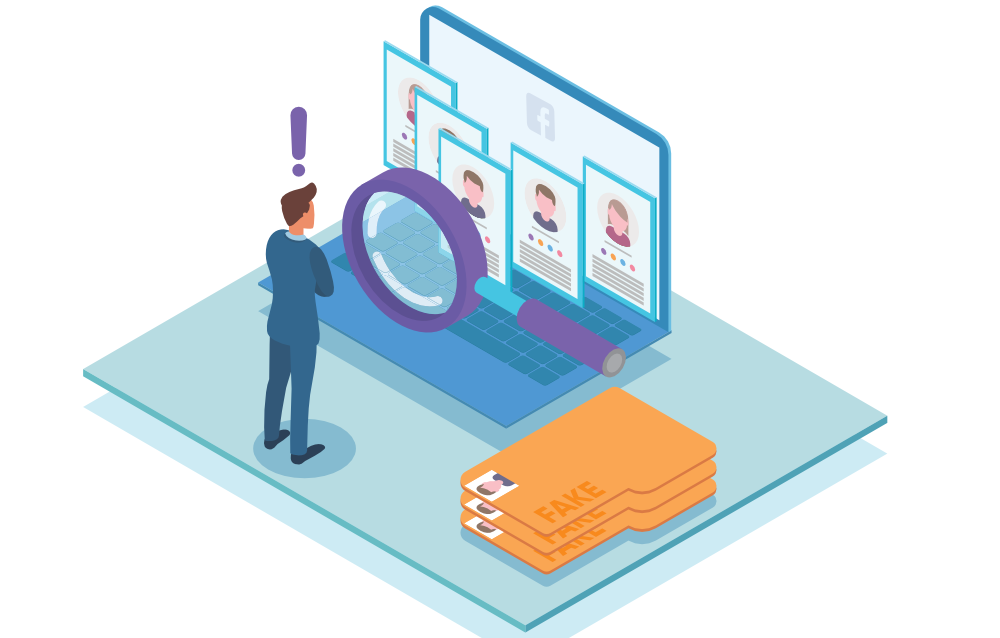 Facebook has published its Community Standards Enforcement Report for 2019 that provides details about Facebook Standards (Basically what content is and isn’t allowed on Facebook). According to this report, an astounding 2.2 Billion fake accounts were removed in the first quarter of 2019. And if that isn’t shocking enough, this is almost double the fake accounts removed in the last quarter of 2018 (1.2 Billion if you are interested!). These figures are crazy keeping in mind that there are actually only about 2 billion (real) people who actively use Facebook on a monthly basis.

According to Facebook, an increased frequency of automated attacks is responsible for these fake accounts bypassing the initial rejection stage, which in turn has increased their prevalence. However, Facebook also states that most of these fake accounts are removed before they can do any long-lasting damage.

As stated by Facebook CEO Mark Zuckerberg, “Most of these accounts are blocked within minutes of their creation before they can do any harm.” And indeed, Facebook has improved tremendously at proactively removing the content that violates its community standards. For example: A year ago, only 38% of posts for hate speech were removed proactively while that number has increased to 65% now.

An important question that arises after studying the facts and statistics provided above is “How does Facebook Find and Remove Fake Accounts?” keeping in mind the sheer amount of them cropping up ( 2.2 Billion in 3 months in case you have forgotten!!!). So let’s now focus on the methods that Facebook employs for this Herculean Task!

When it comes to abusive fake accounts, our intent is simple: find and remove as many as we can while removing as few authentic accounts as possible. – Alex Schultz, VP of Analytics (Facebook)

There are mainly 3 methods that Facebook uses to find and remove fake accounts while simultaneously preserving as many authentic accounts as possible. These are given below:

1. Block Fake Accounts Before They Are Created

Don’t want fake accounts? Well, the best method for that is don’t let them be created at all.

Facebook has detection technology that can detect suspicious activity and block fake accounts even before they are created (Of course they can…They’re Facebook!!!). For example, if there are signals of multiple accounts being created simultaneously from one location, then these accounts are most likely fake and Facebook blocks their IP addresses so that the problem is nipped in the bud.

According to Facebook estimates, there are millions of fake accounts that are blocked before being created every day and this data is not included in the Community Standards Enforcement Report as there is no way of concretely measuring it.

2. Remove Fake Accounts Proactively Before They Are Reported

In case some fake accounts pass the previous stage….Well doesn’t matter, they are removed when they sign up in a proactive manner. This is done by identifying them on the basis of suspicious email addresses, suspicious actions, or association with other fake accounts. Most of the fake accounts created on Facebook are removed almost as soon as they are created and before they can do indulge in any malicious activity. (Facebook is prompt indeed!)

According to the Community Standards Enforcement Report, 99.8% of fake accounts were proactively detected and handled in 2019 before any users felt the need to report them. 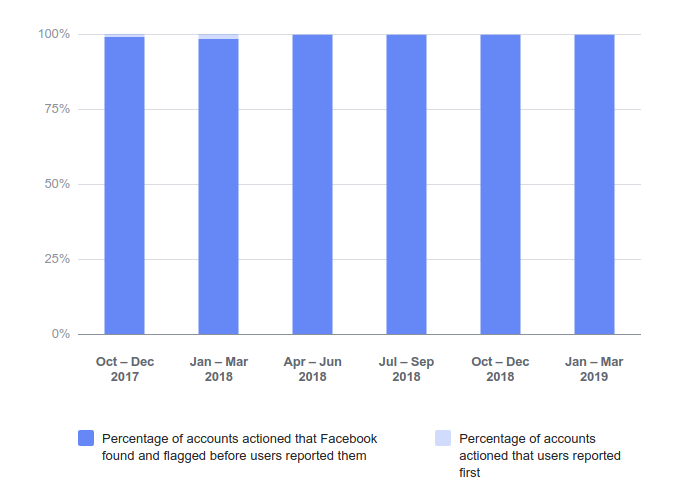 3. Remove Fake Accounts When They Are Reported

There are some accounts that get past the previous two stages as they appear normal and hardly suspicious at first. These accounts are removed when they exhibit signs of spiteful activity and are reported by people (Do report such accounts!!!).

In general, when any Facebook account is reported, it’s reviewed on the basis on the Facebook Community Standards and removed in case it does not comply with them. However, 99% of fake accounts are proactively detected by Facebook before anybody can report them (As seen in the above image).

Previous
Cross-Site Request Forgery (CSRF) Protection Methods and Bypasses
Next
Advantages of cracking GATE from Indian Perspective
Related Articles
1. How 55 engineers at WhatsApp manage a billion users?
2. How did Apple Become World’s First $1 Trillion Company?
3. Imposter Syndrome In Software Developers: Am I A Fake Developer?
4. How does the Google's "Did you mean" Algorithm work?
5. CAT Preparation 2019: A Complete Preparation Package You Require for Cracking CAT 2019
6. EdgeRank Algorithm - Algo behind Facebook News Feed
7. Why should you not Hack Facebook!
8. How to auto like all the comments on a facebook post using JavaScript ?
9. The true story about Facebook's closed AI Wing
10. 5 Mind-Blowing Ways Facebook Uses Machine Learning
Article Contributed By :