When we apply force to a material, we know that it either expands or compresses in response. The force applied per unit area is known as stress in mechanics and is symbolized by the symbol. Strain is the amount to which a substance compresses or stretches. Different materials react differently to stress. Engineers will need this knowledge while deciding on materials for their constructions.

While studying springs and elasticity in the nineteenth century, English scientist Robert Hooke found that numerous materials displayed a similar characteristic when the stress-strain connection was studied. There was a linear area where the force required to stretch the material was proportionate to its extent. Hooke’s Law is the name for this. Let us go through Hooke’s law in depth in this post.

Thus, stress can be defined as,

Stress refers to the body’s resistance to deformation. It may be represented mathematically as the restoring force per unit area.

The dimensional formula of stress is [ML-1T-2].

The dimensional formula of stress and pressure are the same.

Stress is a scalar quantity.

The strain definition defines it as the amount of deformation experienced by the body in the direction of force applied, divided by the original dimensions of the body. The relationship for deformation in terms of a solid’s length is provided below.

The strain has no unit.

It has no dimensions, it is just a number.

According to Hooke’s law, the force required to extend or compress a spring by a certain distance is directly proportional to that distance. The spring stiffness is a constant factor feature. The property of elasticity indicates that stretching a spring twice as long requires twice as much power. Hooke’s law is the linear relationship of displacement on stretching.

A linearly elastic material is one that acts elastically and has a linear connection between stress and strain. Stress is precisely proportional to strain in this situation.

The strain will remain in the body for as long as the stress is present, and when the tension is eliminated, the body will return to its original shape. Elasticity is the name given to this characteristic of materials. Hooke’s law, in essence, provides the foundation for elasticity, and hence it is known as the elasticity principle or law of elasticity.

The dimensional formula of the Modulus of elasticity is the same as that of stress or pressure. 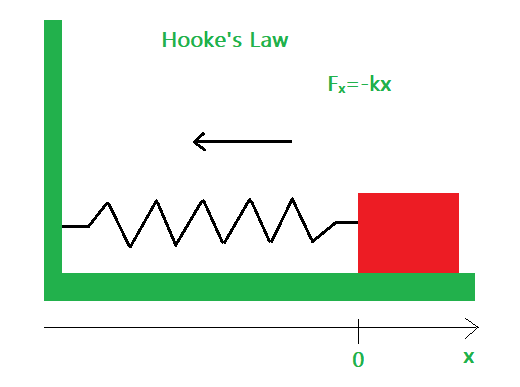 According to Hooke’s Law in an elastic body, extension and tension are proportional to each another. This relationship was discovered by Robert Hooke. Hooke’s law experiment is a good way to understand the behavior of materials when the degree of deformation is very small. This law is frequently demonstrated using a coil spring with weights suspended from it. The change in the length of the spring is proportional to the force of gravity F on the suspended weight.

Hooke’s Law Equation is given as,

where F is the amount of force applied in N, x is the displacement in the spring in m and k is the spring constant or force constant.

Problems 1: A body is under tensile stress, its original length was L m, after applying tensile stress its length becomes L/4 m. Calculate the tensile strain applied to the body.

Problem 2: A copper wire of length 2.5 m has a percentage strain of 0.012 % under a tensile force. Calculate the extension in the wire.

Due to the repeated stress and strain, the material used in bridges loses elastic strength and ultimately may be collapsed. That is why bridges are declared unsafe after long time of use.

Problem 5: A force of 500N causes an increase of 0.5% in the length of a wire. Find out the longitudinal strain.

Problem 7: Write down the cause of restoring stress in a stretched wire and compressed wire.

Problem 8: What are the Limitations of Hooke’s Law?

Although Hooke’s law is often utilised in engineering, it is not a universal principle. When a material’s elastic limit is surpassed, the legislation is no longer relevant. Hooke’s law usually gives correct findings for sold particles when the deformations are minimal. Many materials depart from Hooke’s rule long before they reach the elastic limit.