Blockchain can be defined as the Chain of Blocks that contain some specific Information. Thus, a Blockchain is a ledger i.e file that constantly grows and keeps the record of all transactions permanently. This process takes place in a secure, chronological (Chronological means every transaction happens after the previous one) and immutable way. Each time when a block is completed in storing information, a new block is generated.

1991: In 1991, researcher scientists named Stuart Haber and W. Scott Stornetta introduce Blockchain Technology. These scientists wanted some Computational practical Solution for time-stamping the digital documents so that they couldn’t be tempered or misdated. So both scientists together developed a system with the help of Cryptography. In this System, the time-stamped documents are stored in a Chain of Blocks.

1992: After that in 1992, Merkle Trees formed a legal corporation by using a system developed by Stuart Haber and W. Scott Stornetta with some more features. Hence, Blockchain Technology became efficient to store several documents to be collected into one block. Merkle used a Secured Chain of Blocks that stores multiple data records in a sequence. However, this technology became unused when the Patent came into existence in 2004.

2000: In the year 2000, Stefan Konst published his theory of cryptographic secured chains, plus ideas for implementation.

2004: In the year 2004, Cryptographic activist Hal Finney introduced a system for digital cash known as “Reusable Proof of Work”. This step was the game-changer in the history of Blockchain and Cryptography. This System helps others to solve the Double Spending Problem by keeping the ownership of tokens registered on a trusted server.

2008: After that 2008, Satoshi Nakamoto conceptualized the concept of “Distributed Blockchain” in his white paper: ”A Peer to Peer Electronic Cash System”. He modified the model of Merkle Tree and created a system that is more secure and contains the secure history of data exchange. His System follows a peer-to-peer network of time stamping. His system became so useful that Blockchain become the backbone of Cryptography.

2009: After that, the evolution of Blockchain is steady and promising and became a need in various fields. In 2009, Satoshi Nakamoto Releases Bitcoin White Paper. Blockchain technology is so secure that the following surprising news will give proof of that. A person named, James Howells was an IT worker in the United Kingdom, he starts mining bitcoins which are part of Blockchain in 2009 and stopped this in 2013. He spends $17,000 on it and after he stopped he sells the parts of his laptop on eBay and keep the drive with him so that when he needs to work again on bitcoin he will utilize it but while cleaning his house in 2013, he thrashed his drive with garbage and now his bitcoins cost nearly $127 million. This money now remains unclaimed in the Bitcoin system.

2015: In 2015, Ethereum Frontier Network was launched, thus enabling developers to write smart contracts and dApps that could be deployed to a live network. In the same year, the Linux Foundation launched the Hyperledger project.

2016: The word Blockchain is accepted as a single word instead of two different concepts as they were in Nakamoto’s original paper. The same year, a bug in the Ethereum DAO code was exploited resulting in a hard fork of the Ethereum Network. The Bitfinex bitcoin exchange was hacked resulting in 120,000 bitcoin being stolen.

2017: In the year 2017, Japan recognized Bitcoin as a legal currency. Block.one company introduced the EOS blockchain operating system which was designed to support commercial decentralized applications.

2018: Bitcoin turned 10 in the year 2018. The bitcoin value continued to drop, reaching the value of $3,800 at the end of the year. Online platforms like Google, Twitter, and Facebook banned the advertising of cryptocurrencies.

2019: In the year 2019, Ethereum network transactions exceeded 1 million per day. Amazon announced the general availability of the Amazon Managed Blockchain service on AWS.

2020: Stablecoins were in demand as they promised more stability than traditional cryptocurrencies. The same year Ethereum launched Beacon Chain in preparation for Ethereum 2.0. 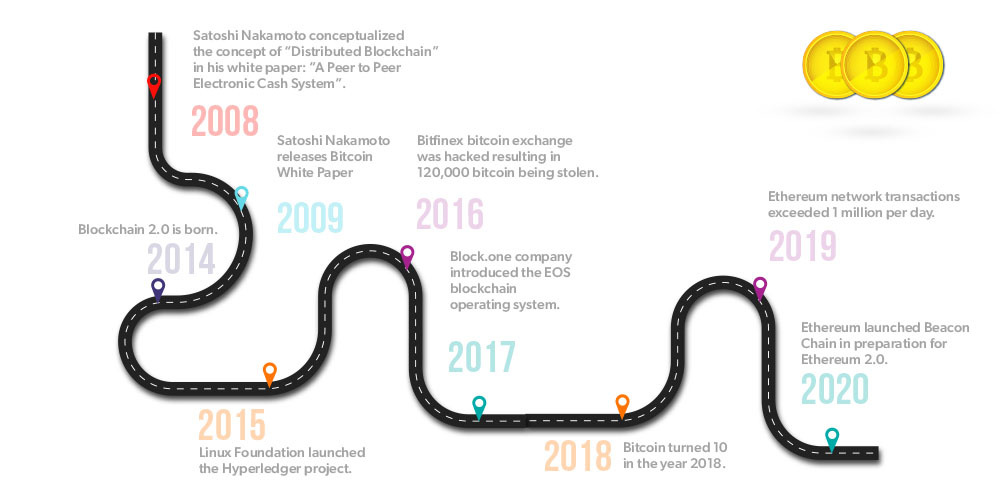