The chemical element Hydrogen has the symbol H and the atomic number 1. The lightest element is hydrogen. Under normal circumstances, hydrogen is a gas composed of diatomic molecules with the formula H2. It’s odourless, colourless, non-toxic, and extremely flammable. Hydrogen is the most abundant chemical element in the universe, accounting for around 75% of all ordinary stuff. The Sun, for example, is mostly made up of hydrogen in its plasma state. The majority of hydrogen on the planet is found in molecule forms like water and organic substances. Each atom of the most common hydrogen isotope (symbol 1H) has one proton, one electron, and no neutrons.

The production of protons, the nuclei of hydrogen, began during the first second following the Big Bang in the early cosmos. During the recombination period, when the plasma had cooled sufficiently for electrons to stay bonded to protons, neutral hydrogen atoms appeared throughout the cosmos around 370,000 years later.

What is Heavy Water?

Urey is credited with the discovery of heavy water. In around 6000 parts of ordinary water, one part of heavy water is found. Lewis and Donald were able to extract a few millilitres of pure heavy water from water containing a trace quantity of alkali using continuous electrolysis. It was discovered in the Himalayas, in the leftovers left over after the melting of snow. Miniscule amounts can also be detected on Banyan tree leaves and in rainfall.

Hydrogen is liberated significantly faster than deuterium when water is electrolyzed. As a result, H2O bonds break more easily (18 times more easily) than D2O bonds. As a result, when the electrolysis is maintained until just a little amount of water remains, the residue is pure D2O. We got roughly 1ml of heavy water electrolyzed from 30 litres of water.

Heavy water is made by electrolyzing a 0.5M sodium hydroxide solution in a steel cell for an extended period of time. The anode is a cylindrical perforated sheet of nickel, whereas the cathode is the cell itself. 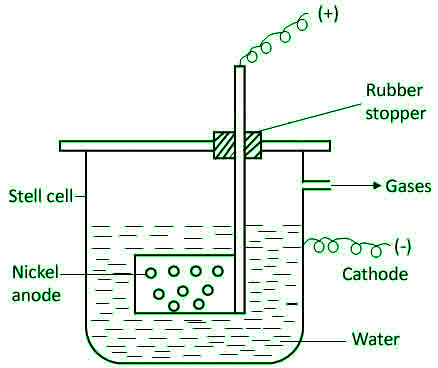 Heavy water, D2O, may also be produced by exchange processes. When H2S gas passes through heated water, for example, the hydrogen atoms in H2S are replaced by deuterium atoms from D2O present in the water. As a result, D2S is added to H2S. When this H2S enriched with D2S is passed through cold water, the deuterium from D2S and hydrogen from H2O swap places again. The procedure is repeated, and the cold water is gradually enriched with D2O.

The fractional distillation procedure may affect the separation of heavy water from ordinary water. The difference in boiling points of ordinary water (100°C) and heavy water (101.42°C) is used in this procedure. As a result, the lighter portion distils first, leaving behind a heavier water-rich residue (D2O).

Heavy water is a colourless, odourless, and tasteless mobile liquid, similar to regular water. The following are some of the physical qualities of water and heavy water.

It produces deuteron phosphine when metal phosphides are used.

It produces deuteron acetylene or deuteron methane when metal carbides are used.

Question 1: In heavy water, which hydrogen isotope is present?

Deuterium is a hydrogen isotope. Heavy water is made up of the elements deuterium and oxygen. Due to an additional neutron in its nucleus, it is a stable isotope of hydrogen with double the mass of hydrogen.

Question 2: What is the purpose of heavy water?

Heavy water is used to kill germs and bacteria. The structure and basicity of some oxyacids are studied using the exchange reaction feature of heavy water. Deuterium is produced from heavy water by electrolysis or a reaction with an active metal like sodium. In nuclear reactors, heavy water is utilised as a moderator. Neutrons with a slow speed are necessary for the fission of Uranium atoms. By flowing through heavy water, which acts as a moderator, the neutrons are retarded. Heavy water is frequently utilised as a tracer in the investigation of aromatic electrophilic substitution reactions, metabolic activities, and other processes.

Question 3: How heavy water is prepared?

Hydrogen is liberated significantly faster than deuterium when water is electrolyzed. As a result, H2O bonds are more easily broken (18 times easier) than D2O bonds. As a result, if the electrolysis is prolonged until just a little amount of water remains, the residue is pure D2O. When approximately 30 litres of water is electrolyzed, approximately 1 millilitre of heavy water is produced.

Question 5: What are the properties of heavy water?

D2O is a tasteless, odourless, and colourless liquid. At 11.6 °C, it has a maximum density of –1.1073 gmL–1. Because heavy water is more viscous than ordinary water, it has a lower solubility of salt than ordinary water. The larger nuclear mass of a deuterium atom than a hydrogen atom, as well as stronger hydrogen bonding in D2O than in H2O, account for nearly all physical constants of D2O or higher than H2O.

Question 6: What is Fractional Distillation?

The separation of heavy water from ordinary water may be affected by the fractional distillation technique. In this approach, the difference in boiling points of regular water (100 °C) and heavy water (101.42 °C) is utilised. As a result, the lighter half of the mixture separates first, leaving a heavier water-rich residue behind (D2O).