Hadoop is an open source framework overseen by Apache Software Foundation which is written in Java for storing and processing of huge datasets with the cluster of commodity hardware. There are mainly two problems with the big data. First one is to store such a huge amount of data and the second one is to process that stored data. The traditional approach like RDBMS is not sufficient due to the heterogeneity of the data. So Hadoop comes as the solution to the problem of big data i.e. storing and processing the big data with some extra capabilities. There are mainly two components of Hadoop which are Hadoop Distributed File System (HDFS) and Yet Another Resource Negotiator(YARN).

Hadoop was started with Doug Cutting and Mike Cafarella in the year 2002 when they both started to work on Apache Nutch project. Apache Nutch project was the process of building a search engine system that can index 1 billion pages. After a lot of research on Nutch, they concluded that such a system will cost around half a million dollars in hardware, and along with a monthly running cost of $30, 000 approximately, which is very expensive. So, they realized that their project architecture will not be capable enough to the workaround with billions of pages on the web. So they were looking for a feasible solution which can reduce the implementation cost as well as the problem of storing and processing of large datasets.

In 2003, they came across a paper that described the architecture of Google’s distributed file system, called GFS (Google File System) which was published by Google, for storing the large data sets. Now they realize that this paper can solve their problem of storing very large files which were being generated because of web crawling and indexing processes. But this paper was just the half solution to their problem.

In 2004, Google published one more paper on the technique MapReduce, which was the solution of processing those large datasets. Now this paper was another half solution for Doug Cutting and Mike Cafarella for their Nutch project. These both techniques (GFS & MapReduce) were just on white paper at Google. Google didn’t implement these two techniques. Doug Cutting knew from his work on Apache Lucene ( It is a free and open-source information retrieval software library, originally written in Java by Doug Cutting in 1999) that open-source is a great way to spread the technology to more people. So, together with Mike Cafarella, he started implementing Google’s techniques (GFS & MapReduce) as open-source in the Apache Nutch project.

In 2005, Cutting found that Nutch is limited to only 20-to-40 node clusters. He soon realized two problems:
(a) Nutch wouldn’t achieve its potential until it ran reliably on the larger clusters
(b) And that was looking impossible with just two people (Doug Cutting & Mike Cafarella).
The engineering task in Nutch project was much bigger than he realized. So he started to find a job with a company who is interested in investing in their efforts. And he found Yahoo!.Yahoo had a large team of engineers that was eager to work on this there project.

So in 2006, Doug Cutting joined Yahoo along with Nutch project. He wanted to provide the world with an open-source, reliable, scalable computing framework, with the help of Yahoo. So at Yahoo first, he separates the distributed computing parts from Nutch and formed a new project Hadoop (He gave name Hadoop it was the name of a yellow toy elephant which was owned by the Doug Cutting’s son. and it was easy to pronounce and was the unique word.) Now he wanted to make Hadoop in such a way that it can work well on thousands of nodes. So with GFS and MapReduce, he started to work on Hadoop.

In 2007, Yahoo successfully tested Hadoop on a 1000 node cluster and start using it.

In 2009, Hadoop was successfully tested to sort a PB (PetaByte) of data in less than 17 hours for handling billions of searches and indexing millions of web pages. And Doug Cutting left the Yahoo and joined Cloudera to fulfill the challenge of spreading Hadoop to other industries.

And currently, we have Apache Hadoop version 3.0 which released in December 2017. 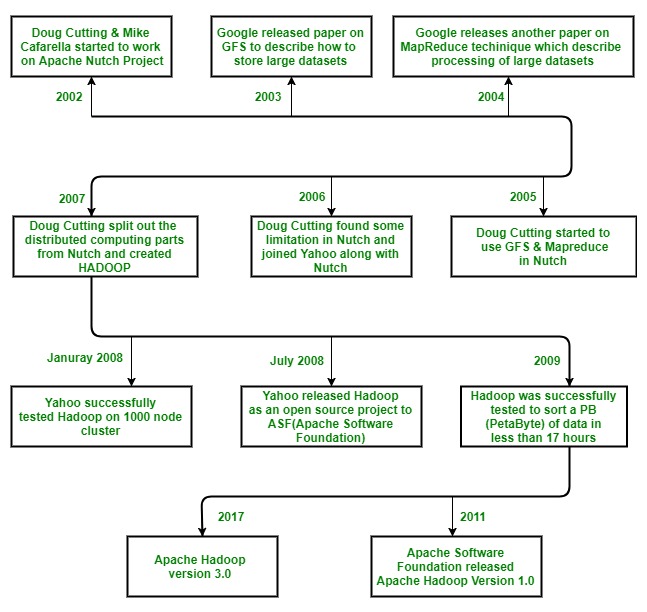