In Social Networks there are two kinds of relationships or ties :

In a scenario, there is a person and he has 4 friends out of which 3 are in the same company and 1 friend works in a different company. Now as shown in the figure, there occurs 2 communities, one in which Z and his 3 friends work and the other one friend works. 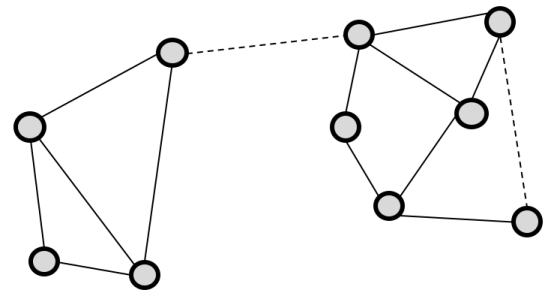 In the above figure, the dotted line represents a weak tie and the plain line represents a strong tie. Now, in 1973 a Stanford professor published a paper called the Strength of Weak Ties. According to Granovetter’s paper, the strength of weak ties is said that each tie has its different perspective and advantages as well and everyone talks about the advantages of strong ties but there are also some advantages of weak ties as well which is absent in strong ties.

Example :
Out of 10 people, 9 people got their job or switched their job through the referral of a person who is their friend’s friend or any other acquaintances and not their close friends. The reason for that is not because their close friends do not want to but the real valid reason is that all the close friends or we can say strong ties remain in the same group as you.

Assume I have 5 friends A, B, C, D, and E. Out of these 5 friends 4 (A, B, C, D) work in the same place where I work and E works in a different company. Now almost all the information that A, B, C, and D have is already known to me as we live in the same world. 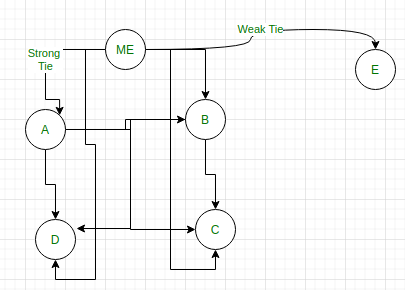 So strong ties are weak when it comes to information related to new jobs or job switch and weak ties are strong in the same scenario.