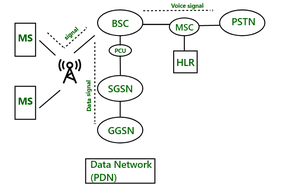 In GSM architecture there is one component called BSC. But in GPRS there is one component is added to BSC called PCU. PCU stands for Packet Control Unit. If signal comes to BSC and that signal contains data, then PCU routes to the SGSN. Interface is used between BSC and PCU is FRI interface. After signal comes to SGSN, it delivers the data packet to the GGSN. GGSN routes the data packet to the data network (PDN- Predefined Data Network).