Rinki works for StoreCraft(Say) as a site reliability engineer, where she’s on-call maintaining their custom storefront. StoreCraft’s systems are developed in-house in Python and have been running on virtual machines for years, a set up that evolved as StoreCraft’s businesses did. These virtual machines use slightly different versions of Python. This is causing extra pain and work for Rinki and her team. Rinki is looking for a way to reduce this pain by updating all the components to current Python and also migrating away from virtual machines onto something more scalable, like serverless. StoreCraft is about to launch a new recommendation engine, which is written using Python 3.8 (the latest version in 2020). However, it has a dependency on the sweet-ldap package, which doesn’t yet support Python 3.

Rinki knows that this upgrade will take time. And her team needs to make sure the existing system keeps running.  How will Rinki solve this problem on GCP?

She realizes that she can best achieve this by completing the upgrade in two steps. First, moving to serverless, then making the language upgrades. As StoreCraft is about to launch a new recommendation engine, which is written using Python 3.9. Rinki sees this as the perfect candidate to deploy a serverless by skipping the virtual machine altogether. Looking at the options available on Google Cloud, Rinki sees that while she could deploy on Cloud Functions, she would be forced to use only specific versions of Python. However, she sees that the newest serverless offering from Google Cloud, called Cloud Run, doesn’t have this limitation. 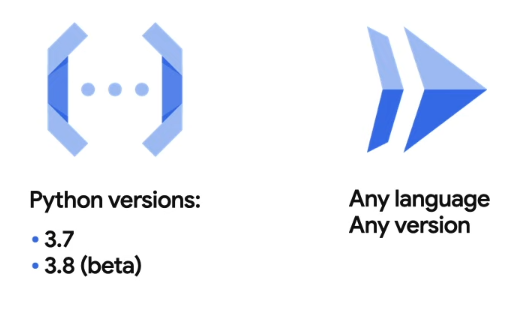 So she chooses to deploy there instead. Creating this service on Cloud Run, Rinki has complete control over the container. Making use of the official Python images on the Docker hub, she can pick the exact version of Python(ie, Python 3.8) she needs down to the patch level by specifying the base image in the front line of the Dockerfile. As each Cloud Run service is based on its own container image, which is each defined by its own Docker file, Rinki has complete control over the languages used in each part of her setup.

Since each Cloud Run service has this level of isolation, Rinki can move each of them to Cloud Run one at a time. She is also able to maintain the services running on the original virtual machines until the team has the availability to upgrade.

It has a dependency on the sweet-ldap package, which doesn’t yet support Python 3. Rinki is able to keep the service running on the now deprecated Python 2.7 by specifying the latest version of Python 2 in the Docker file as shown below:

As soon as the sweet-ldap package has Python 3 support, Rinki can test this new version by gradually rolling out a new revision of the service using the traffic splitting feature of Cloud Run. 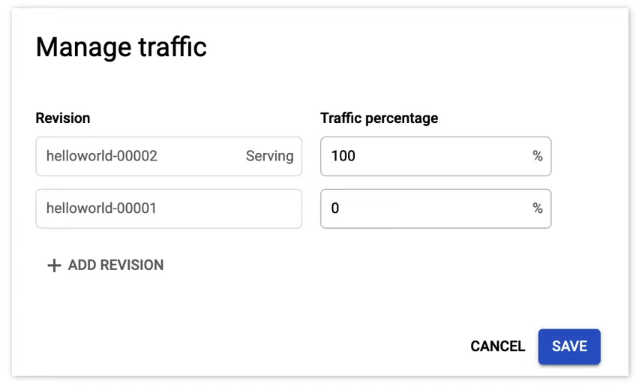 She can set the new revision of the count service to, say, service only 5% of visitors, that way only some of her customers end up using the new code. If she notices that something isn’t working as intended, she can easily rollback to the old version. By migrating each service in turn, Rinki is able to control them in isolation, allowing for a more incremental upgrade process and a more reliable environment.