The Goods and Services Tax or GST is a single, indirect tax that integrates all indirect taxes within the Indian economy. The GST Act was passed on 29th March 2017 in the Parliament of India and came into effect on 1st July 2017. The idea behind it was to replace multiple layers of taxation with one tax (GST). It has replaced 17 indirect taxes (9 State-level taxes and 8 Central level taxes) and 23 cesses of the States and Centres that existed earlier, including Central excise duty, Service tax, Value Added Tax (VAT), Luxury Tax, etc. The aim behind implementing the GST Act was ‘One Nation and One Tax’. When GST was implemented, 1300 goods and 500 services were taken into consideration.

GST is a destination-based consumption tax as it is charged at every stage, wherever some value is added to the goods or services, and the supplier of the good or service off-sets the charge on its inputs of the previous stages. The charge is offset through the tax credit mechanism. Ultimately, the last dealer passes on the added GST to the consumer of the goods or services. The reason behind charging input credit at every stage of the value chain is to avoid the cascading effect. Cascading effect means charging tax on tax. The Government of India has eliminated the cascading effect with the expectation of reducing the prices of goods or services and benefiting the consumers.

A company is manufacturing Good X at the cost of ₹1,000 on which it has to pay Excise Duty @ 10% to the Central Government and VAT @ 12% to the State Government.

Now, the manufacturer will sell the Good to the dealer at ₹1,100.

It can be seen that initially, Excise Duty is charged on the Good X, on which further VAT is levied. This is known as cascading effect, i.e., charging tax on tax.

GST avoids this cascading effect by charging tax only once. With GST, the tax will be charged as a percentage of the cost of goods directly. 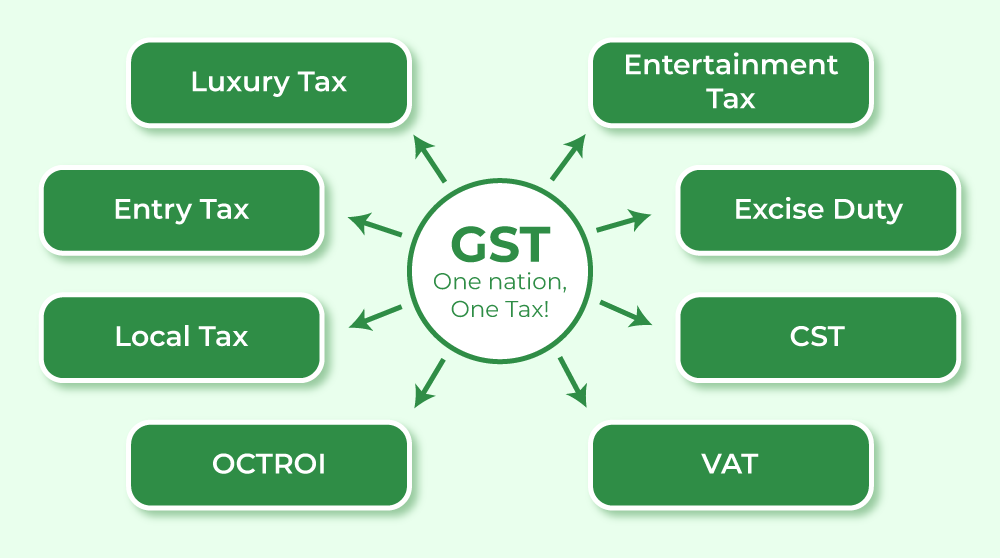 The three types of taxes under GST are:

1. Single Tax Structure: The basic aim of GST is to replace multiple taxes with a single tax and make the price of goods or services uniform across the country. However, in doing so, some goods or services became cheaper, while some became costly.

2. Effect on Prices: Goods and Services Tax has made luxury goods costlier and goods manufactured for mass consumption cheaper.

4. Invoice Matching: The invoice matching mechanism will be added to the Indian GST. It means that when details of inward supply filed in by the buyer match the details of outward supplies filed in by the supplier, then only Input Tax Credit of purchased goods or services will be available to them. Besides, GST is a self-regulating mechanism, as it keeps a check on tax evasion and tax fraud and also brings more business to the formal economy.

6. Registration under GST: It is mandatory for an organization with an aggregate turnover exceeding ₹ 40 Lakhs in a financial year to register under GST. However, this limit is set at ₹ 20 Lakhs for the North Eastern and hilly states (Special category states).

1. GST Rates: The States and Centres have mutually decided upon the GST rates levied on goods or services through CGST, SGST, and IGST under the aegis of the GST Council. The four tax slabs under GST are 5% (for consumer durables), 12% (general rate), 18% (general rate), and 28%(luxurious goods). However, the rate of GST for exports and supplies to the Special Economic Zones (SEZs) is 0%.

2. Applicability of GST: The Goods and Services Tax applies to the whole country (India).

3. Consumption-Based Tax: Earlier, the taxes were based on the principle of origin-based taxation. However, the Goods and Services Tax is a destination-based consumption tax, which means that the taxes will be received by the states in which the goods or services have been consumed. As the tax is received by the consumer State, the losses faced by Producer States are compensated by the Centre.

Ways in which GST benefits and empowers citizens

2. No hidden taxes: As GST is replacing all indirect taxes with one tax, there are no chances of a hidden tax within the invoice of the goods and services. For example, if a commodity costs ₹500, it means that the overall cost of the commodity is ₹500 without any hidden taxes.

3. Development of a harmonised national market for goods and services: Harmony in tax rates, laws and procedures simplifies its compliance. The common interface of the GST portal brings synergy and efficiency to the filing of taxes. Earlier, service tax and VAT had their own returns and compliances, which was time-consuming. However, GST merges both compliances and lowers the number of returns, ultimately reducing the time spent on these compliances.