Goldfeld-Quandt Test – This test is used to test the presence of Heteroscedasticity in the given data. The test was given by Stephen M Goldfeld and Richard E Quandt.

This test can be used if the error variance is positively related to one of the explanatory variables( Xi ). Mathematically it is given as –

If the regression model is:

where ui is the residual/error term.

and the error variance is positively related to Xi2 , i.e.,

It can be understood in simpler terms if we understand the concept of heteroscedasticity.

Heteroscedasticity — It is the situation in which variability of the independent variable (Y) is unequal across the range of values of an explanatory variable(Xi). If a scatterplot is drawn between the two variables a cone-like shape is created. As the value of Xi increases the scatter of variable Y widens or narrows creating a cone-like structure. For example, : When we try to predict the annual income on the basis of age of a person then the annual income can be a heteroscedastic variable as to when someone starts as a fresher the income earned is lesser than compared to someone who is experienced over the years and the hike in salary can have an evident amount of variation. 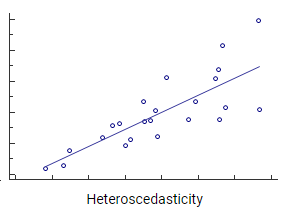 Note: The absence of heteroscedasticity is called homoscedasticity which says that the variability is equal across values of an explanatory variable.

Step 1: Arrange the observations in ascending order of Xi. If there are more than one explanatory variables( X ) then you choose the one regarding which you have a concern that with this variable the error variance is positively related and arrange in ascending order according to this variable. In other words, you can choose any one of them to arrange.

Step 5: Find out the critical value

Use the F Table to find out the critical value for the given level of significance(alpha). In this test, the values of df1 and df2 are the same(df1=df2).

This is all about the Goldfeld-Quandt Test. For any queries do leave a comment down below.