Glycerol is a basic poly compound that is also referred to as glycerin. Glycerol is an odorless, colorless, and viscous liquid that is non-toxic and sweet-tasting. In certain lipids, the glycerol backbone is found which is referred to as triglycerides. or Glycerin is found in lipids like triglycerides and is obtained from animal and plant sources. It is water-soluble due to three hydroxyl groups.

The chemical formula for Glycerol is C3H8O3. Its compound contains more than one group of hydroxyls. glycerol contains three hydroxyl groups in its chemical structure, which are -OH groups bound to the carbon atoms. It has 3 Carbon atoms, 3 Oxygen atoms, and 8 Hydrogen atoms.

Its formula is given with its structural and extended chemical formula. Glycerol which is also known as glycerin is a viscous, colorless, non-toxic, and simple triol compound.

It is used in dermatological treatments and also has several benefits which are also used in the food industry as a preservative and sweetener. the vital role of glycerol as an osmolyte, a solvent, a detergent, a human metabolite, a saccharomyces cerevisiae metabolite, an escherichia coli metabolite, a mouse metabolite, an algal metabolite, and a geroprotector. It is a trigol and alditol.

Glycerol is a triglyceride that is present in many plants such as soybean, palm, and animals and it can also produce glycerol with the help of industrial methods to produce it from saponification or hydrolysis of triglycerides. It is a trihydroxy sugar alcohol with the presence of three carbon atoms and three hydroxyl groups, it is an organic poly compound with the IUPAC name of 1, 2, 3-Propanetriol because it includes various hydroxyl groups and carbon atoms.

In glycerol Because of the hydroxyl (-OH) groups bound to the carbon atoms, glycerol is soluble in water. This highly hygroscopic aspect of glycerol is also responsible for these hydroxyl groups, which ensures that it quickly retains or takes up water.

Glycerin, or glycerol is a triol compound that is an essential part of lipids from plants and animals. It is used by dermatologists for dermatological treatments. In recent times we largely use it as a biofuel compound. Some of the scientists find its backbone in those lipids that we know as glycerides. Glycerol has special properties as antiviral and antimicrobial that’s why pharma industries widely used them in FDA approved wound and burn treatments. By extracting water from tissues into interstitial fluid and plasma, glycerol or glycerin elevates the blood plasma osmolality. Glycerin or glycerol is localized with osmotic diuretic and laxative effects and it is trihydroxy alcohol. By attracting water into the rectum, thereby relieving constipation, glycerin exerts a hyperosmotic laxative effect.

Structure of Glycerine or Glycerol 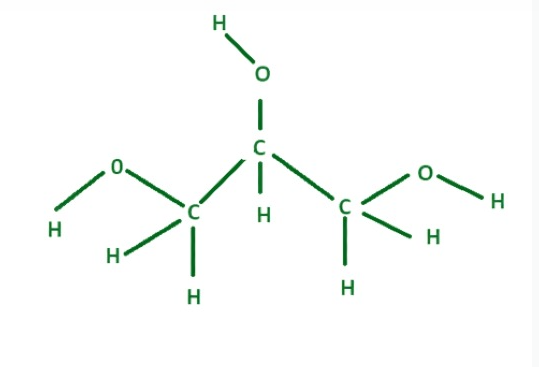 Under some standard conditions for temperature and pressure (STP), glycerin or glycerol exists as a colorless hygroscopic liquid that does not have any characteristic odor. This compound of glycerol forms miscible mixtures with water.

Glycerine can cause mild irritation to the eyes, nose, lungs, and skin, particularly due to its hygroscopic nature. Skin and other internal organs of the body can get dried out when pure glycerol directly comes into contact with these moist tissues. Since the molecule can bind to water, it’s the same property that makes glycerol a good humectant also desiccates internal tissues. On the other hand, if a cosmetic preparation or cosmetic product with high water content is applied on the skin, especially in arid environments, glycerol can also prevent the lotion, cream, or gel from quickly drying out.

The primary use of glycerin is in the food and beverage industry, where it is employed as a humectant, sweetener, and as solvent. In the food industry, Glycerin is also used as a preservative for the storage of food items. Some Other important uses of glycerin have been listed below,

Question 1: What is the melting and boiling point of Glycerine?

Glycerol is a basic poly compound which is also referred to as glycerin.

Question 2: What is the use of glycerin on the skin?

Glycerin is a vital component of many skincare products. After applying glycerine to the skin retains moisture in the skin and gives it a safe, youthful glow. It also helps to reduce the emergence of wrinkles by attracting moisture to the top layer of skin and leaves the skin looking soft and smooth. Additionally, glycerine also increases skin function to delay ageing.

Question 3: How can glycerine be produced?

Glycerol is a triglyceride that is present in many plants such as soybean, palm and animals and it can also produce glycerol with the help of industrial methods to produce it from saponification or hydrolysis of triglycerides.It is also obtained from animal and plant also .

Question 4: What is the effect of glycerine?

Glycerine can cause mild irritation to the eyes, nose, lungs and skin, particularly due to its hygroscopic nature. Skin and other internal organs of body can get dried out when pure glycerol directly comes into contact with these moist tissues.

Question 5: Which of the Food contains Glycerol?

Question 6: Is Glycerine safe to eat?

It is safe to eat because glycerin is used as a sweetener and preservative in food items. As well as glycerol can be classified as a caloric macronutrient. But in some cases  individuals may be allergic to glycerin. or It can be toxic to such people.

Question 7: What is the density of Glycerine? What is the procedure to make glycerine at home ?

Procedure to make glycerol at home