Carbon is a chemical element, it is nonmetallic with an atomic mass of 12.0107u, and the atomic number is 6 with the symbol C. It consists of tetravalent-making four electrons available to form covalent chemical bonds. The carbon name comes from the Latin word carbo means coal. Carbon is present in the universe in fewer amounts but is important to survive. It can be found in fossil fuels, polymers, and soaps detergents. Carbon is mostly used to form carbohydrates by photosynthesis from water and carbon dioxide in the presents of sunlight. Oxygen is the chemical element with the symbol O and atomic number 8. Oxygen is Earth’s most abundant element, and after hydrogen and helium, it is the third-most abundant element in the universe. However hydrogen is a unique element, with an atomic number of 1, it is the lightest element and is the most abundant element in the universe.

Glucose is made by plants during photosynthesis from water and carbon dioxide, in the presents of sunlight. It is used to make cellulose in the cell walls of plants, the most abundant carbohydrates in the world occur from glucose. The chemical formula of glucose is C6H12O6. It can be named sample sugar (monosaccharide). by the chemical name D-glucose.

It is also known as simple sugar belongs to the carbohydrates group. It consists of 6 carbon atoms. It is in two forms, 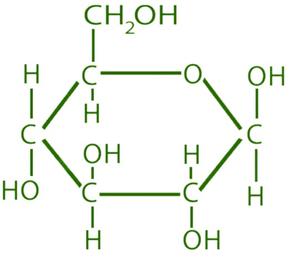 Question 1: Write the process of photosynthesis?

The process of photosynthesis is present in the plants and the living organisms which consist of chlorophyll. By using water and carbon dioxide in the presence of sunlight it can be happen. In this process we can get the glucose and oxygen which are of main use to human beings. This process is very useful for sustaining human life.

Question 2: What is chlorophyll?

Chlorophyll is nothing but a green color leaf and it in appears in green color. It is present in the plants and some living organisms which look green and can produce energy by sunlight. It can be processed to absorb the energy from sun light for the process of photosynthesis. The main work of chlorophyll is to convert carbon dioxide and water in to glucose by photosynthesis.

Question 3: What is the glucose chemical reaction in living organisms?

Question 5: What are the factors affecting photosynthesis?

Question 6: Write about chlorophyll and its work?

Chlorophyll molecules are arranged in and around photosystems that are embedded in the thylakoid membranes of chloroplasts. Chlorophyll allows plants to absorb energy from light. Chlorophyll is any of several related green pigments found in the mesosomes of cyanobacteria and in the chloroplasts of algae and plants. A green pigment, present in all green plants and in cyanobacteria, which is responsible for the absorption of light to provide energy for photosynthesis. With the help of sunlight, chlorophyll does the process of photosynthesis which produces the glucose. When the sunlight reflected on a green plant on chlorophyll it absorbs the energy and converts into carbohydrates which is the second form of glucose.

Question 7: How can we store glucose?