Getting Started with Vim Editor in Linux

Vim is an advanced and highly configurable text editor built to enable efficient text editing. Vim text editor is developed by Bram Moolenaar. It supports most file types and vim editor is also known as a programmer’s editor. We can use its plugin based on our needs

Installation and Configure vim in Our Linux System

To install vim on Debian based Linux like ubuntu run the command:

To install vim on an arch-based distro run the following command:

Now vim will be installed on your system.

You can open vim by running vim command on the terminal. 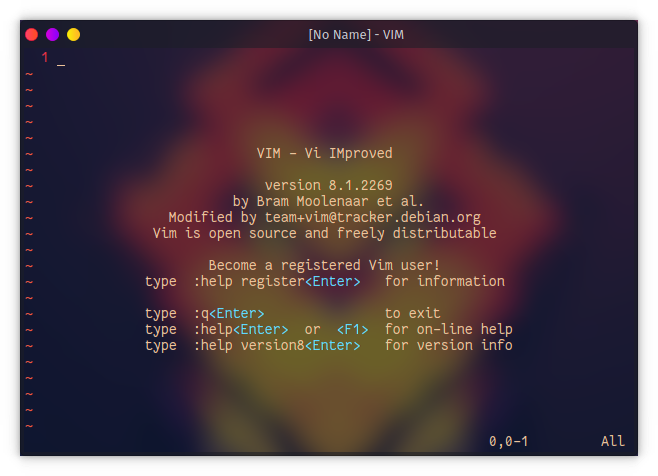 There are some commands given to use the vim editor. You can see all commands, and it’s documentation by help command as follows:

Now to exit type this command 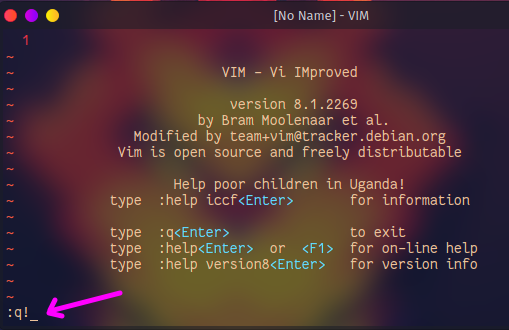 Now, Let’s Start to use Vim

To open a file in vim editor just write the file name after the vim command in the terminal as follows:

Then the file will be opened.

In the previous step we have opened the file now, Let’s write some content in to write data we need to go in insert mode. To go into write mode type i.  As follows:

After going into insert mode you will see INSERT in the status bar. After that, we can write any data in it. 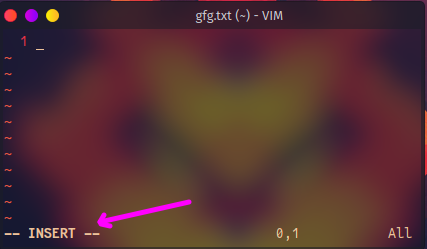 We have written the data into a file now the task is to save and close the file to do that first exit from insert mode by pressing the Esc key. To write a command first type semicolon  (  :  )  and then type the command wq!  or x! (both do the same thing) And then hit ENTER. 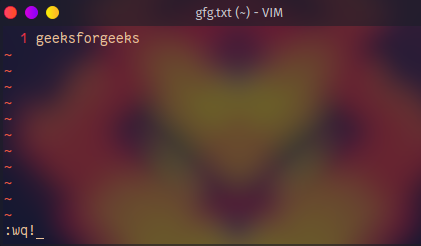 Exit without saving the file:

To exit from the file without saving the file just use the command q! As follows

Vim also comes with its own tutorial. You can see this tutorial by command vimtutor into the terminal .

Now vim tutorial will be opened as follows: 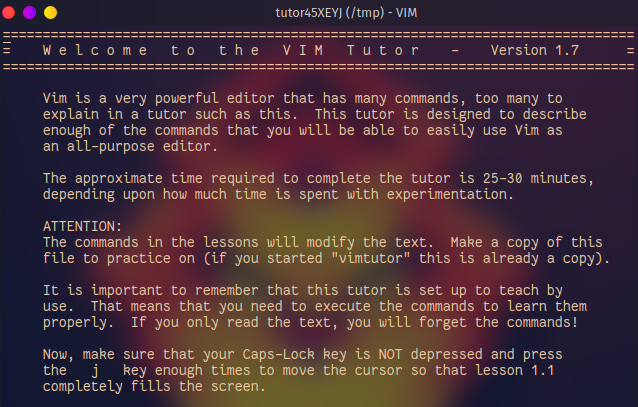 Just use these commands in vim files and move the faster cursor into the files.

To exit without doing anything go into command mode by pressing the Esc key and type the following command.

To quit and save changes type the following command

The character under the cursor will be deleted.

We have edited some text files before by using the i key. There are Four keys used for the insertion of text. Just type the key into the normal mode in vim.

Motion: Motions provide context to your Operators. These execute the action in a particular way.

Count: Count is the number for which replete the motion for count number. Here is a demonstration of the use of count and motion

To move courser 2 words forward use the following command

To move the cursor 4 lines forward use the following command

Deletion Commands: Always use the Esc key to go into normal mode and use the insertion, deletion keys, and other keys.

To delete the word move the cursor to the beginning of the word and use dw command in normal mode. The word under the cursor will be deleted.

To delete more than one word in a single line use the following command.

To delete 2 words use the command

To delete the line move cursor to the beginning of the line and use d$ command in normal mode. The line under the cursor will be deleted.

As we are programmers most time we are using undo and redo .vim to provide these to both features in it. To undo press u key in normal mode

To replace the character under the cursor use rx command where ‘x’ is a character is to replace.

In vim c is used as a change operator. To replace the word use ce command

To replace the line use c$ command

This command will delete the contains from the cursor to the end of the line. Then this will automatically go into insert mode then you can put anything in that line,

We can use the h,j,k,l key to move the cursor in the file but it will be difficult to move in big file vim provide more commands to move into the file.

To view the current cursor location in the file using the following command:

In place of 32 use can put any line number.

To search the word After the cursor uses the backslash key and then write the word and press enter.

Use n to move on next matching word

Use N to move on previous matching word

To do replace all occurrence of word use g

This command will replace the word globally.

To confirm before replacements of words use gc

To configure vim, vim comes with the .vimrc file in the home directory if this file is not there then create one. Then open the file in vim by command

You can put your all configurations in this file.

You can set line number by using a simple command

Put this command in your .vimrc file

To enable syntax highlighter in vim use command

Put this command in .vimrc file then save file and exit after opening file again you will see the line numbers in vim.

Vim comes with many color schemes using the command: 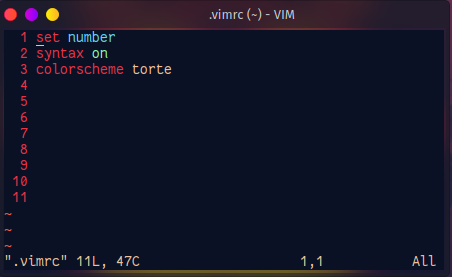