getopts Command in Linux with Examples

getopts is a very convenient bash script utility, which helps you to conveniently and gracefully handle the passing of flags(short version), and arguments in a clean, standardized manner. Instead of having the developer manually handle the flags passed to a script, this provides a handy way of handling this when iterating through a while loop.

Prerequisites: It is recommended to have a basic idea of the following topics:

To get the syntax through terminal:

The above command will print the details of the command along with some parameters and options that could be used to run the command. 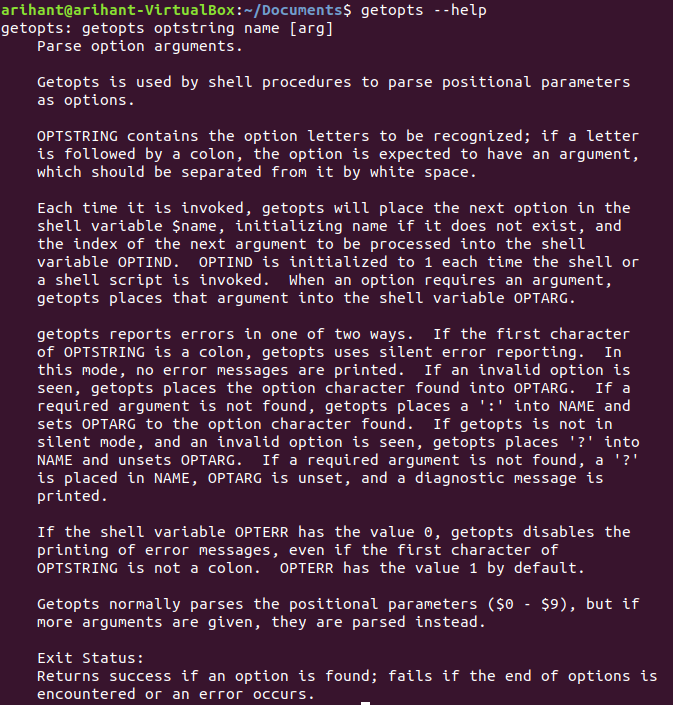 2. Usage in a script: getopts could be used in a script in Linux as well. The following script depicts the same.

This script runs a while loop, which iterates through the arguments that match with given optstring, in this case, “a:bc:”, and stores the value of the flag in the variable flag. If the flag had any associated argument, it is stored in a variable OPTARG.

The optstring works in the following way:

3. Running the script by passing the arguments as expected.

Note: OPTARG for -b is blank, and not its previous value since it is initialized for every iteration. Also, -c is not passed, which is not an issue, as each flag in optstring is optional.

4. Running the script by skipping the parameter for a flag where it is required: This prints an error message. The flag is initialized to “?”, and OPTARG is “.

5. Running the script by adding a flag not present in the optstring: This prints an error message. Again, the flag is initialized to “?”, and OPTARG is “”.

If the first character was “:”, getopts goes into silent mode, the error messages are not printed, and the behavior changes in some cases. Consider the optstring “:a” for the following example-

6. Skipping the parameter for a flag where it is required: The flag is initialized to “:”, and OPTARG is set to the option character.