Geometrical meaning of the Zeroes of a Polynomial

An algebraic identity is an equality that holds for any value of its variables. They are generally used in the factorization of polynomials or simplification of algebraic calculations. A polynomial is just a bunch of algebraic terms added together, for example, p(x) = 4x + 1 is a degree-1 polynomial. Similarly, polynomials can be of any degree 1, 2, 3… and so on. Polynomials are basically those Mathematical Expressions that make calculations easy in real life. There are different types of polynomials depending upon the number of terms present in them, for example, if there are 2 terms, it is known as a binomial.

Let’s assume that P(x) is a polynomial. Let x = r, be the value of x where our polynomial P(x) becomes zero i.e,

The process of finding the zeroes of P(x) is simply solving the equation P(x) = 0. We already know how to calculate zeros for first and second-degree polynomials. Let’s see some examples for this,

The last example used the factorization method for finding the roots of the polynomial. We can also use other methods such as the zero factor of the Shree Dharacharya Quadratic formula for finding out the roots or zeros of a polynomial.

This formula for finding out roots of a polynomial is known as Shree Dharacharya Quadratic Formula.

As it is clear that the above expression cannot be simplified just by intuition, therefore, we shall go for the Dharacharya Formula.

Geometric Meaning of Zeros of a Polynomial

Let’s take a polynomial y = 2x + 1, this is also an equation of a straight line. The figure below represents the graph of this straight line. We will look at the positions where y becomes zero. 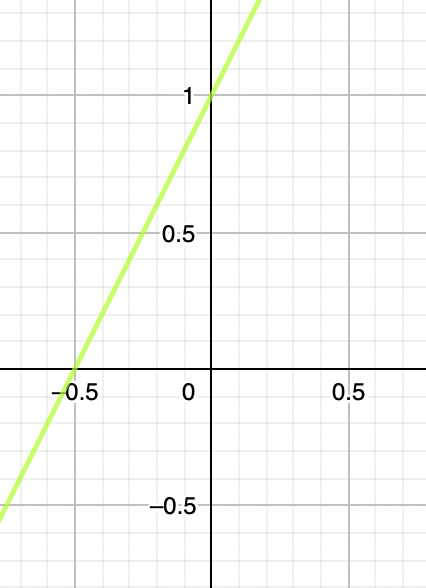 So, in general, for a polynomial y = ax + b, it represents a straight line with one root, which lies on the position where the graph cuts the x-axis i.e ( 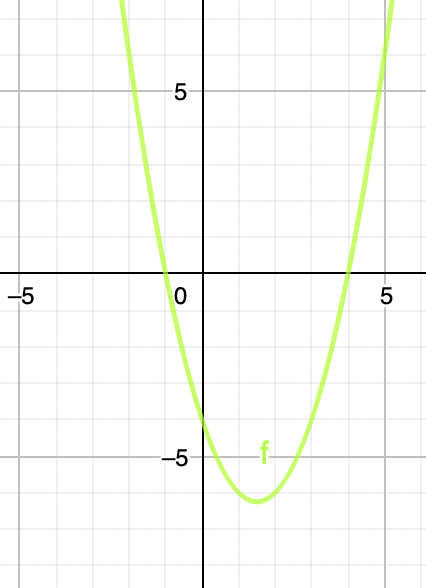 In this graph, we can see that it cuts the x-axis at two points. So, these two points are the zeros of this polynomial. But will it be always this case? This graph can be upward facing or downward-facing depending upon the coefficient of x2.

In general, the zeroes of a quadratic polynomial ax2 + bx + c, a ≠ 0, are precisely the x-coordinates of the points where the parabola representing y = ax2 + bx + c intersects the x-axis.

Three possible cases can happen to the shape of the graph.

Case (i): The graph cuts the x-axis at two distinct points A and A′. This is the case that’s been shown above.  Here the polynomial y = ax2 + bx + c has two distinct roots.

Case (ii): The graph cuts the x-axis at exactly one point, i.e., at two coincident points. Two same roots. Here the polynomial y = ax2 + bx + c has only one root. 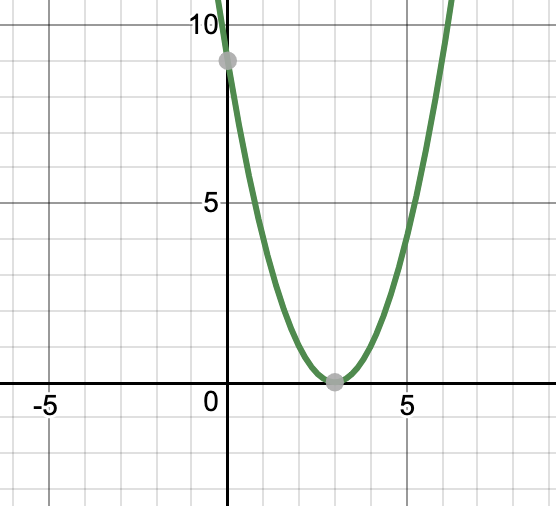 Case (iii): The graph is either completely above x-axis or completely below the x-axis. Here the polynomial y = ax2 + bx + c has no roots. 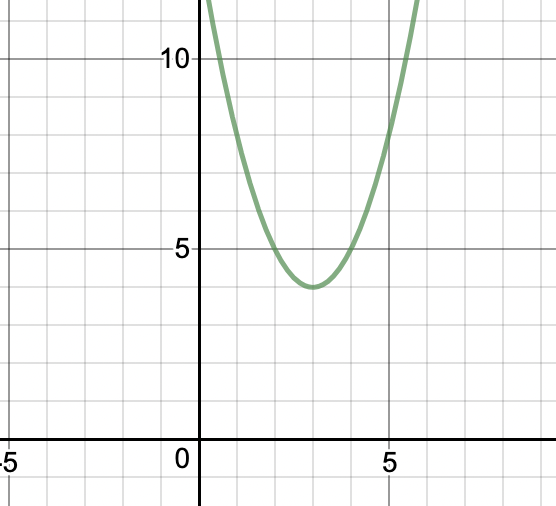 Similarly, let’s study this for a cubic polynomial.

We can verify from the graph that these must be the places where the curve cuts the x-axis. 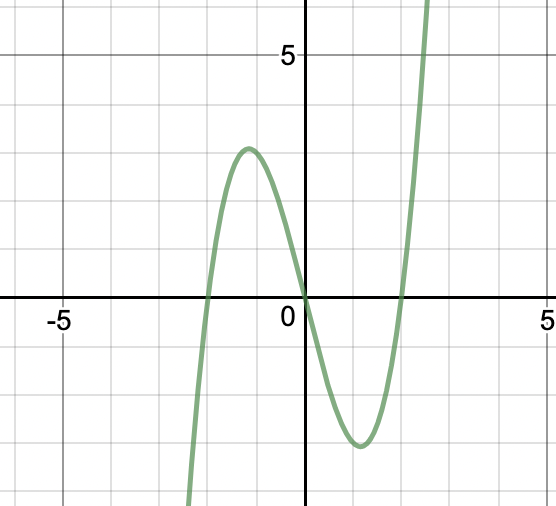 But as in the case of second-degree polynomials, there may be more than one possibility. 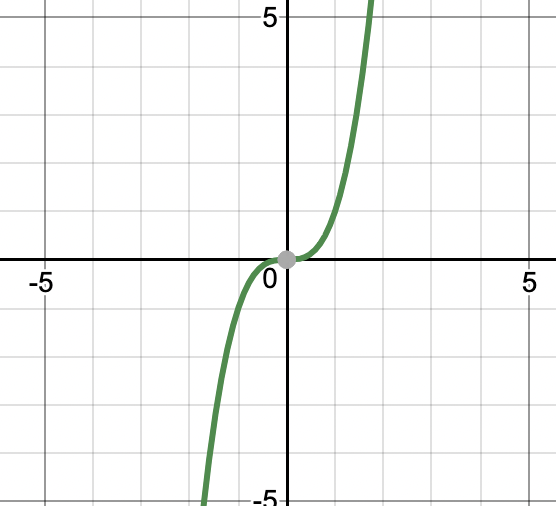 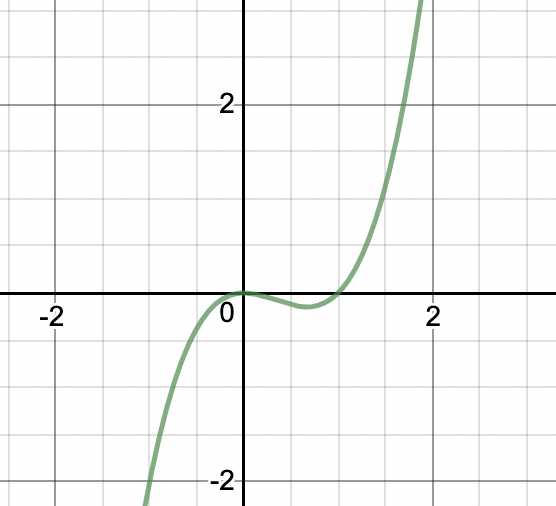 We can see that the graph of this function cuts the x-axis at two places only. From the above example, we can say that this polynomial can have at most 3 zeros.

Note: In general a polynomial of degree “N” can have at most N zeros.

Question 1: Which of the following graphs represents a cubic polynomial. 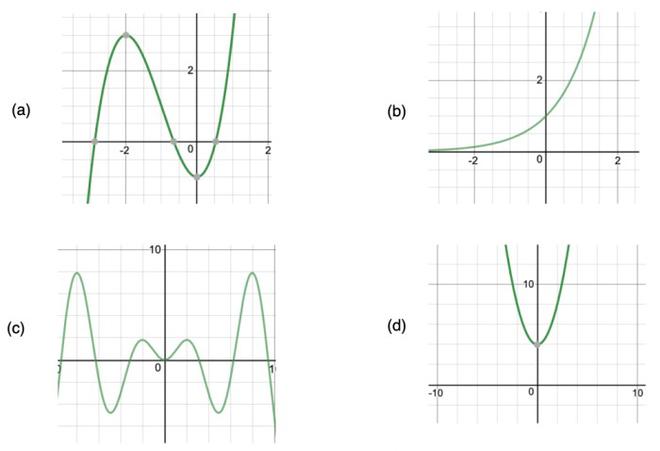 (A) is the graph of a cubic polynomial because it cuts the x-axis only three times.

(B) does not cut the x-axis at all and is continuously increasing, So it cannot be.

(C) It cuts the x-axis at more than 5 points. So it cannot be three degree polynomial

(D) It is a graph of a parabola, we studied earlier. So it is not a cubic polynomial.

From the equation, we can tell that there are 2 values of x.

Factorizing the quadratic equation to find out the values of x, 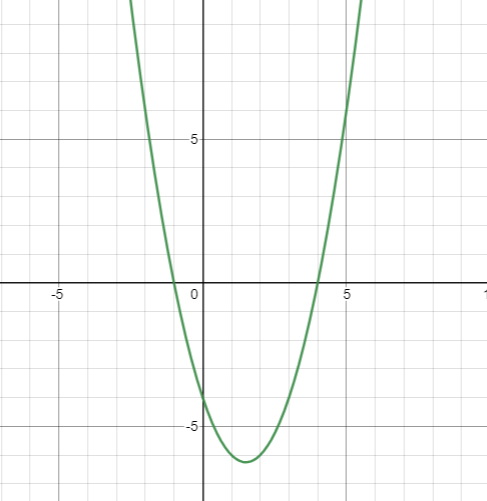 Question 3: Find the point where the graph intersects x-axis for the quadratic equation, x2 – 2x – 8 = 0

Factorize the quadratic equation to find the points, 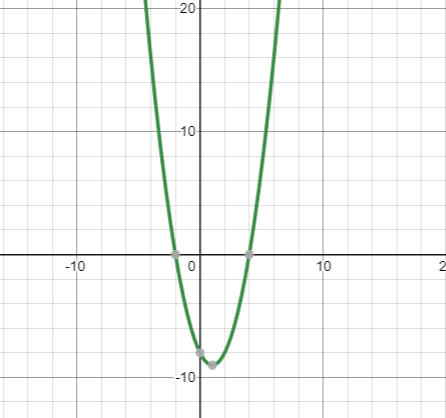 My Personal Notes arrow_drop_up
Previous
Exact Equations and Integrating Factors
Next
Relationship between Zeroes and Coefficients of a Polynomial
Recommended Articles
Page :
Formula for Perimeter of Geometrical Shapes
26, Jan 22
Relationship between Zeroes and Coefficients of a Polynomial
21, Mar 21
Derivatives of Polynomial Functions
14, Dec 20
Zeros of a Polynomial
17, Mar 21
Polynomial Formula
25, Apr 22
CBSE Class 10 History Chapter 1 - The Rise of Nationalism in Europe
22, Sep 22
Women’s Political Participation in India
20, Sep 22
How to use the Unit Circle in Trigonometry?
11, Sep 22
Exponential Functions
10, Sep 22
What is the common difference of four terms in an AP?
10, Sep 22
Use Trigonometric Substitution and Trigonometric Identity to determine the Circumference of a Circle of Radius 3.
01, Sep 22
Heterotrophic Nutrition
31, Aug 22
Article Contributed By :