GenericIPAddressField in Django Forms is a text field, for input of IP Addresses. It is field containing either an IPv4 or an IPv6 address. The default widget for this input is TextInput. It normalizes to a Python string. It validates that the given value is a valid IP address.

Illustration of GenericIPAddressField using an Example. Consider a project named geeksforgeeks having an app named geeks.

Thus, an geeks_field GenericIPAddressField is created by replacing “_” with ” “. It is a field to input of IP addresses.

Now let’s try entering some other data into the field. 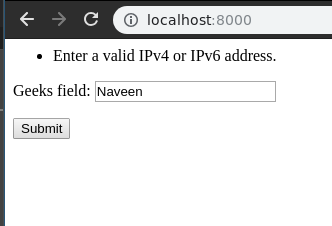 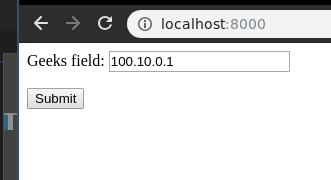 Now this data can be fetched using corresponding request dictionary. If method is GET, data would be available in request.GET and if post, request.POST correspondingly. In above example we have the value in temp which we can use for any purpose. You can check that data is converted to a python string instance in geeks_field.

Core Field arguments are the arguments given to each field for applying some constraint or imparting a particular characteristic to a particular Field. For example, adding an argument required = False to GenericIPAddressField will enable it to be left blank by the user. Each Field class constructor takes at least these arguments. Some Field classes take additional, field-specific arguments, but the following should always be accepted: