Science is a fascinating subject that is full of fascinating information. The more one delves into the principles of science and its associated disciplines, the more knowledge and information there is to be gained. The Gauss Law, which analyses electric charge, a surface, and the issue of electric flux, is one such research topic. Let us learn more about the law and how it functions so that we may comprehend the equation of the law.

What is Gauss Law?

The total electric flux out of a closed surface is equal to the charge contained divided by the permittivity, according to Gauss Law. The electric flux in a given area is calculated by multiplying the electric field by the area of the surface projected in a plane perpendicular to the field.

The total flux associated with a closed surface equals 1 ⁄ ε0 times the charge encompassed by the closed surface, according to the Gauss law.

For example, a point charge ‘q’ is put within a cube with edge ‘a’. The flux across each face of the cube is now q ⁄ 6ε0, according to Gauss law.

The formula of Gauss law is given by: 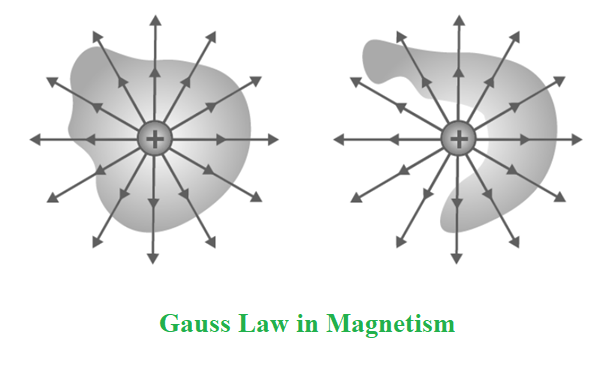 Problem 1: In the x-direction, there is a homogeneous electric field of size E = 50 N⁄C. Calculate the flux of this field across a plane square area with an edge of 5 cm in the y-z plane using the Gauss theorem. Assume that the normal is positive along the positive x-axis.

The flux of the field across a plane square, ϕ = ∫ E cosθ ds

As the normal to the area points along the electric field, θ = 0.

Problem 2: How do we choose an appropriate Gaussian Surface for different cases?

In order to select an acceptable Gaussian Surface, we must consider the fact that the charge-to-dielectric constant ratio is supplied by a (two-dimensional) surface integral over the charge distribution’s electric field symmetry.

Depending on where we want to compute the field, we may determine the size of the surface. The Gauss theorem is useful for determining the direction of a field when there is symmetry, as it informs us how the field is directed.

Problem 3: How to find the electric field using Gauss law?

Normally, the Gauss law is employed to calculate the electric field of symmetric charge distributions. When using this law to solve the problem of the electric field, there are numerous processes required. The following are the details:

Problem 4: There are three charges q1, q2, and q3 having charges 4 C, 7 C and 2 C enclosed in a surface. Find the total flux enclosed by the surface.

Problem 5: What is the differential form of the Gauss theorem?

The electric field is related to the charge distribution at a certain location in space by the differential version of Gauss law. To clarify, according to the law, the electric field’s divergence (E) is equal to the volume charge density (ρ) at a given position. It’s written like this:

Here, ε0 is the permittivity of free space.