When multiplicand Y is multiplied by multiplier X = xn – 1xn-2 ….x0 using bit-pair recoding in Booth’s algorithm, partial products are generated according to the following table. 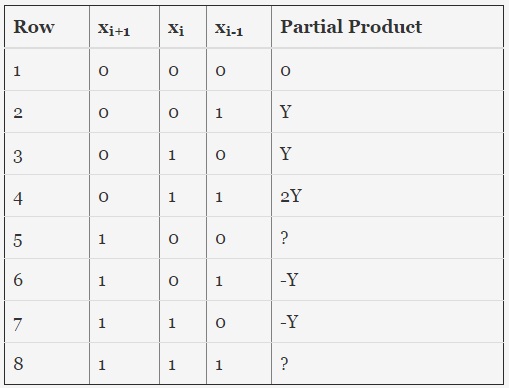 Answer: (C)
Explanation: ALU cannot directly multiply numbers, it can only add, subtract or shift. Booth’s algorithm is a means by which we can perform multiplication with the help of addition, subtraction and shift. For performing multiplication, write both the signed numbers in binary and make the no. of bits in both equal by padding 0. Here, partial product is calculated by bit pair recoding in booth’s algorithm.

This solution is contributed by Shashank Shanker khare.
Quiz of this Question