Fuzzy logic control (FLC) is the most active research area in the application of fuzzy set theory, fuzzy reasoning, and fuzzy logic. The application of FLC extends from industrial process control to biomedical instrumentation and securities. Compared to conventional control techniques, FLC has been best utilized in complex ill-defined problems, which can be controlled by an efficient human operator without knowledge of their underlying dynamics.

The output of the physical system under control is adjusted by the help of an error signal. The difference between the actual response (calculated) of the płant and the desired response gives the error signal. For obtaining satisfactory responses and characteristics for the closed-loop control system, an additional system, called as compensator or controller, can be added to the loop. The basic block diagram of the closed-loop control system is shown in Figure 1. The fuzzy control rules are basically IE-THEN rules. 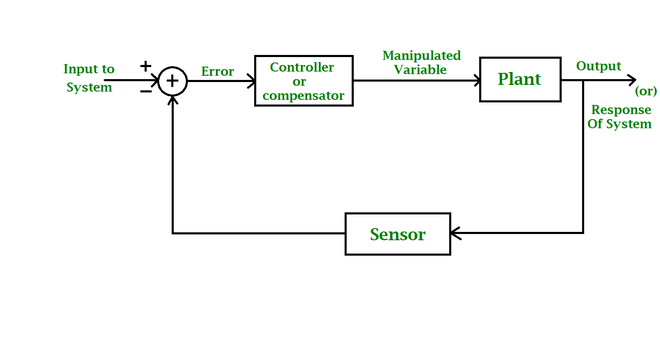 Designing a controller for a complex physical system involves the following steps:

Apart from the first four steps, there may be uncertainties occurring due to external environmental conditions. The design of the controller should be made as dose as possible to the optimal controller design based on the expert knowledge of the control engineer. This may be done by various numerical observations of the input-output relationship in the form of linguistic, intuitive, and other kinds of related information related to the dynamics of the plant and the external environment. Finally, a supervisory control system, either manual operator or automatic, forms an extra feedback control loop to tune and adjust the parameters of the controller, for compensating the variational effects caused by nonlinear and remodelled dynamics. In comparison with a conventional control system design, an FLC system design should have the following assumptions made, in case it is selected. The plant under consideration should be observable and controllable. A wide range of knowledge comprising a set of expert linguistic rules, basic engineering common sense, a set of data for input/output, or a controller analytic model, which can be fuzzified and from which the fuzzy rule the base can be formed, should exist. Also, for the problem under consideration, a solution should exist and it should be such that the control the engineer is working for a “good” solution and not especially looking for an optimum solution. The controller, in this case, should be designed to the best of our ability and within an acceptable range of precision. It should be noted that the problems of stability and optimality are ongoing problems in the fuzzy controller design.

In designing a fuzzy logic controller, the process of forming fuzzy rules plays a vital role. There are four structures of the fuzzy production rule system (Weiss and Donnel, 1979) which are as follows:

All the necessary parameters used in the fuzzy logic controller are defined by membership functions. The rules are evaluated using techniques such as approximate reasoning or interpolative reasoning. These four structures of fuzzy rules help in obtaining the control surface that relates the control action to the measured state or output variable. The control surface can then be sampled down to a finite number of points and based on this information, a look~up table may be Constructed. The look~up table comprises the information about the control surface which can be downloaded into a read·only memory chip. This chip would constitute a fixed controller for the plant.

Architecture and Operations of FLC System:

The basic architecture of a fuzzy logic controller is shown in Figure 2. The principal components of an FLC system is a fuzzifier, a fuzzy rule base, a fuzzy knowledge base, an inference engine, and a defuzz.ifier. It also includes parameters for normalization. When the output from the defuzzifier is not a control action for a plant, then the system is a fuzzy logic decision system. The fuzzifier present converts crisp quantities into fuzzy quantities. The fuzzy rule base stores knowledge about the operation of the process of domain expertise. The fuzzy knowledge base stores the knowledge about all the input-output fuzzy relationships. It includes the membership functions defining the input variables to the fuzzy rule base and the out variables to the plant under control. The inference engine is the kernel of an FLC system, and it possesses the capability to simulate human decisions by performing approximate reasoning to achieve the desired control strategy. The defuzzifier converts the fuzzy quantities into crisp quantities from an inferred fuzzy control action by the inference engine. 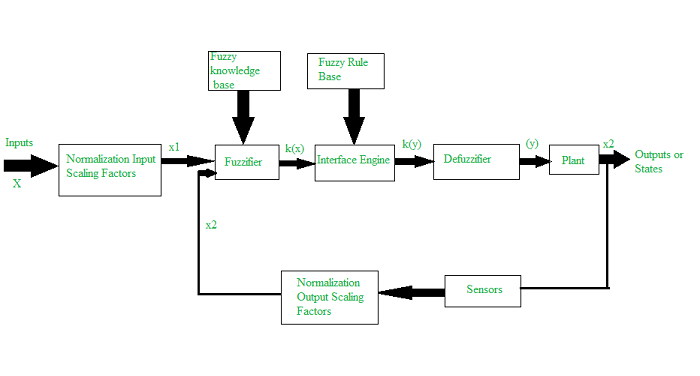 The various steps involved in designing a fuzzy logic controller are as follows:

The above steps are performed and executed for a simple FLC system. The following design elements are adopted for designing a general FLC system:

FLC systems find a wide range of applications in various industrial and commercial products and systems. In several applications- related to nonlinear, time-varying, ill-defined systems and also complex systems – FLC systems have proved to be very efficient in comparison with other conventional control systems. The applications of FLC systems include: