Let’s imagine there is a suitcase with a number lock on it, and the owner forgot his password. The number lock has 4 wheels and each one is labeled with 10 digits from 0 to 9. It can only be unlocked if 4 specific digits are arranged in a particular sequence. But the problem is the owner has forgotten that specific sequence. When asked he just remembers that the first digit is 7. In order to open the lock, how many sequences of 3-digits he may have to check with? To answer this question he immediately starts listing all possible arrangements of 9 remaining digits taken 3 at a time. But, this method will be tedious, because the number of possible sequences may be large. Let’s see some basic counting techniques which enable us to solve such problems.

Let’s see all the different ways of dressing through a diagram. Considering P1, P2, and P3 as pants and S1, S2 as shirts. The tree given below lists the range of possibilities 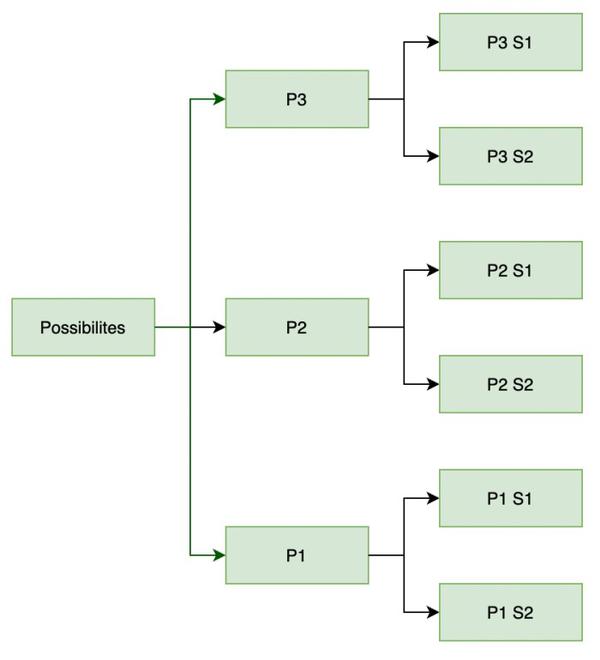 Tree Diagram depicting the number of possibilities for the above example

As shown in the figure, with each type of pant. There are two possible shirts that can be worn. So in total, there are 6 ways of dressing up.

Question: Count the number of possibilities when a coin is tossed 3 times using a tree diagram. 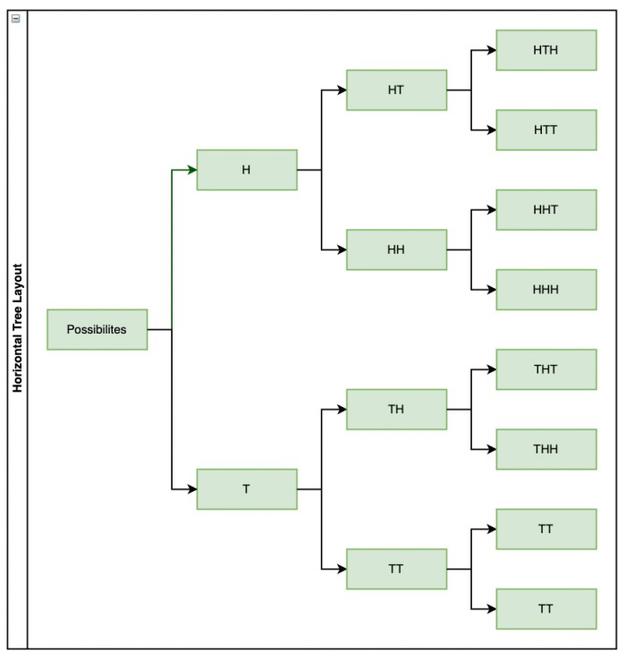 So, there are in total 8 possibilities.

But in these scenarios, it’s not possible for us to manually count the number of possibilities every time or make a tree of them. In this case, the Fundamental principle of counting helps us. It says,

This principle can be extended to any finite number of events in the same way. So, for three events this principle becomes,

Let’s look at examples of this principle to make our understanding concrete.

Question 1: Find the number of four-letter words with or without meaning, which can be made out of letters of the word ROSE, where the repetition of letters is not allowed.

Number of words that can be formed from these four-letter words is equal number ways in which we can fill __ __ __ __ with letters R, O, S, E. Note that repetition is not allowed. The first place can be filled with any of the four letters, after that second place can only be filled by three letters because we have already used one and repetition is not allowed. Third place can only be filled by two letters and last place will be filled with the last remaining letter.

Question 2: Given 6 flags of different colors, how many different signals can be generated, if a signal requires the use of 2 flags one below the other? 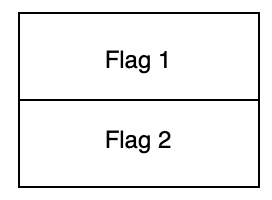 Question 5: There are 10 Daily Newspapers and 4 weekly magazines published in Paris, if Amy wants to subscribe to exactly one daily newspaper and one weekly magazine, how many different choices does she have?