The study of the link between electrical energy and chemical changes is the subject of electrochemistry, a chemistry subdiscipline. Electrochemical reactions are chemical processes that include the input or creation of electric currents. A fuel cell is an electrochemical cell that uses an electrochemical process to create electrical energy from fuel. To keep the processes that generate electricity going, these cells need a constant supply of fuel and an oxidising agent (usually oxygen). As a result, until the supply of fuel and oxygen is shut off, these cells can continue to generate power.

Fuel cells, while being conceived in 1838, did not enter commercial usage until a century later, when NASA utilised them to power space capsules and satellites. Many establishments, including businesses, commercial buildings, and residential structures, now employ these devices as a major or secondary source of electricity.

Fuel cells are cells that directly transform the chemical energy of a fuel cell into electrical energy. Fuels such as hydrogen (H2), carbon dioxide (CO2), methane (CH4), propane (C3H8), methanol (CH3OH), and others are used to create electrical energy in the cells shown below. The fuel cell is constantly supplied with fuel, while the products are continuously removed. There are a great number of fuel cells on the market. The most popular type is a hydrogen-oxygen fuel cell. 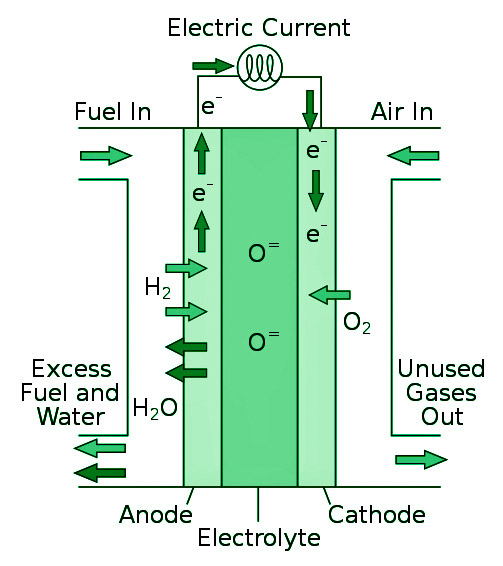 Two porous carbon electrodes are impregnated with a suitable catalyst such as platinum (Pt), silver (Ag), cobalt oxide (CoO), and so on in a basic H2–O2 fuel cell. The electrolyte is a concentrated solution of potassium hydroxide (KOH) or sodium hydroxide (NaOH) that fills the gap between two electrodes. A porous carbon electrode bubbles hydrogen gas (H2) and oxygen gas (O2) into the electrolyte.

Microbial fuel cells (MFCs) are cells that use microbes to catalyse biological processes to generate power from organic or inorganic chemicals. It would be capable of achieving a 50% efficiency rate. Proteobacteria, Desulfuromonas, Alcaligenes faecalis, Pseudomonas aeruginosa, and other microorganisms have been employed in MFCs.

Fuel cells come in a variety of forms.

Solid oxide fuel cells employ a hard, non-porous ceramic substance as the electrolyte and operate at temperatures between 500 and 1000 degrees Celsius. A solid oxide electrolyte is used in SOFCs to transport negative oxygen ions from the cathode to the anode. SOFCs have an efficiency of 50–60 percent.

Satellites and space capsules employ SOFCs to generate electricity. It is mostly employed in big, high-power applications such as industrial generating plants.

The Zinc-Air Fuel Cell (ZAFC) is a kind of fuel cell that was created in the United States for use in vehicles. The electrolyte is an aqueous alkali solution such as potassium hydroxide, and the electrode reactions are as follows:

It is used as an alternative fuel for vehicles.

Methanol is utilised as a fuel in this subclass of proton-exchange fuel cells. The key benefit of this fuel cell is the ease with which stable liquid fuel methanol may be transported. Polymer membrane serves as the electrolyte, and the electrode reactions are as follows:

A fuel cell may use the chemistry between hydrogen and oxygen to create power. This type of cell was utilised in the Apollo space program and had two purposes: as a source of fuel and as a supply of drinking water (the water vapour produced from the cell, when condensed, was fit for human consumption).

This fuel cell worked by transferring hydrogen and oxygen through carbon electrodes into a concentrated sodium hydroxide solution.

This electrochemical process, however, has a slow response rate. A catalyst, such as platinum or palladium, is used to solve this problem. Before being inserted into the electrodes, the catalyst is finely split to maximise the effective surface area.

Fuel cells have a 70% efficiency in the generation of energy, whereas thermal power plants have a 40% efficiency. Because the creation of electric current in a thermal power plant requires the conversion of water into steam and the use of that steam to move a turbine, there is a significant variation in efficiency. Fuel cells, on the other hand, provide a platform for converting chemical energy into electrical energy directly.

Fuel cells are a possible source of electrical energy, and they offer an advantage over galvanic cells and other traditional techniques of generating electricity by burning fuel. The following are some of the major benefits of fuel cells:

Question 1: What is a fuel cell?

Fuel cells are cells that immediately convert a fuel cell’s chemical energy into electrical energy. In the cells depicted below, hydrogen (H2), carbon dioxide (CO2), methane (CH4), propane (C3H8), methanol (CH3OH), and other fuels are utilised to generate electrical energy. Fuel is continually delivered to the fuel cell, while products are continuously withdrawn. On the market, there are many different types of fuel cells. A hydrogen-oxygen fuel cell is the most common form.

Question 2: What are the types of fuel cells?

Question 3: Why do we need fuel cells?

Fuel cells are in high demand since they are a cost-effective and ecologically beneficial source of power. Because they may be manufactured individually, they can be utilised for a variety of applications.

Question 4: What are the limitations of fuel cells?

Question 5: What are hydrogen fuel cells?

The hydrogen fuel cell is a device that directly transforms the chemical energy of hydrogen and oxygen into electricity. Water is created as a by-product of this operation.