Formatting of Strings in Julia

Julia is a high-level language developed by people at Massachusetts Institute of Technology. It is an open-source, high-performance language. It has a simple syntax like Python but has speed and performance of C.

String formatting is the process of evaluating a string literal using string interpolation (filling unknown values between known values), it yields a result in which placeholders are replaced with their corresponding values.

The upper code will replace ‘%s’ with the value of word and the output will be:

There are 2 ways to format a string in Julia.

Printf is a standard library in Julia that is included by following the syntax:

Characters: In the following code, we are storing a single letter ‘c’ in the variable named ‘character’. The character variable is then printed using ‘%c’ format specifier as its data type is char. To make the specifier functionality more understandable another variable ‘character2’ with the same data type (character) is used. 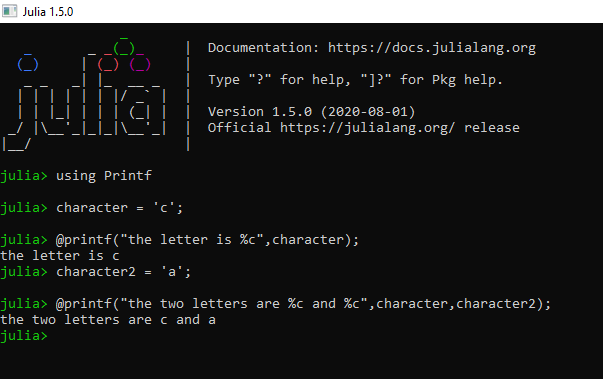 Strings: In the following example a string ‘GeeksforGeeks’ is stored in a variable ‘s’ and is printed using the ‘%s’ specifier and printf. To make this code more understandable, another string S2 is added whose value is ‘I love’, and both the strings are printed together making it ‘I love GeeksforGeeks’. 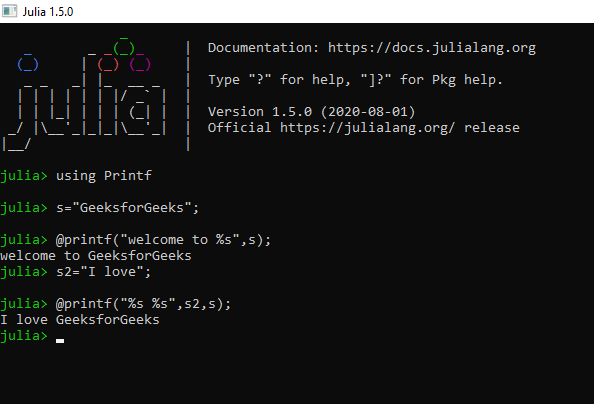 Integers: In the code below, we have defined a variable named integer as 33. We have then printed it using ‘%d’ specifier. Similarly, we have defined one more variable integer2 and have set its value to 42. In the second printf statement, we have printed the sum of both these numbers. 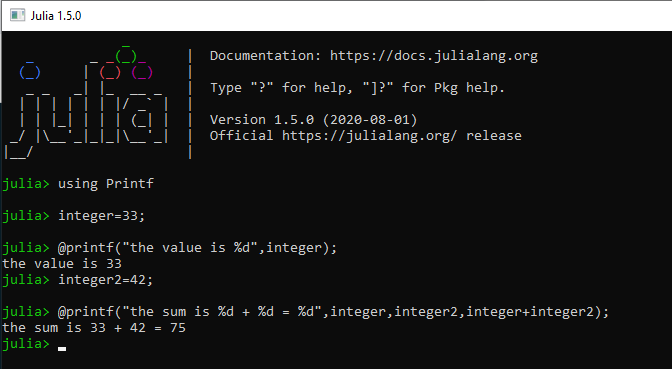 In this output, notice how ‘floatvalue’ (20.3658) is displayed as 2.063580e+01. This happened because we used ‘%e’ specifier and it printed out its scientific representation.

Formatting.jl is an open-source Julia package that was made to provide python like formatting to Julia. This package is available on Github Formatting.jl.

We can use printfmt or printfmtln for formatted printing. Additionally, “fmt” and “format” can be used to format string values.

In this method, formatting is done similarly to that in python. Format specifiers are put inside curly braces {} and ‘%’ symbol is replaced with ‘:’  (look in the code below). 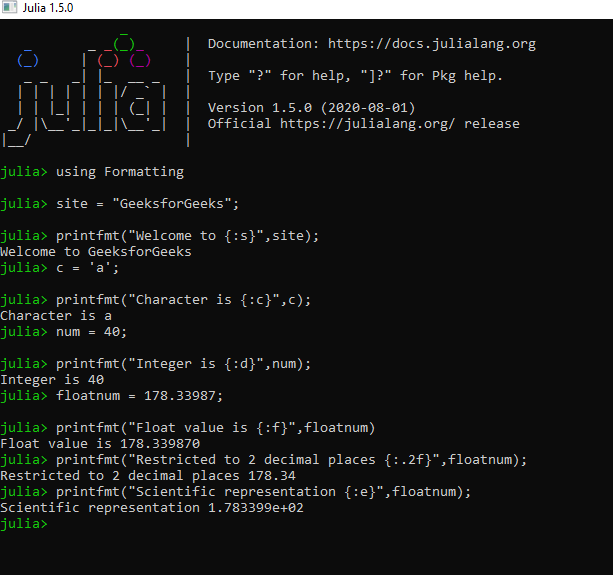 In the output, you can see how {:c}, {:s}, {:d}, {:f}, {:e}, {:.2f}, are replaced with characters, strings, integers, floating-point numbers, scientific representations and floating point numbers restricted to 2 digits after decimal, respectively.