The simplest aldehyde made of hydrogen, carbon and oxygen is called Formaldehyde with the formula of CH2O. It is from a large family of chemicals known as volatile organic compounds which evaporate and become gaseous at room temperature. Let’s learn more about formaldehyde, its properties, structure, uses, etc.

Formaldehyde is first in the series of aliphatic aldehydes and is also a reactive molecule. Formaldehyde is one of the most important industrial chemicals and is usually described as a gas, but it also exists dissolved in water or other solvents. It is a naturally occurring substance used in a wide variety of applications.

The IUPAC name of Formaldehyde is Methanol and its chemical formula is CH2O. Their functional group is an aldehyde: −CHO which is made up of one carbon atom, two hydrogen atoms, and one oxygen atom. 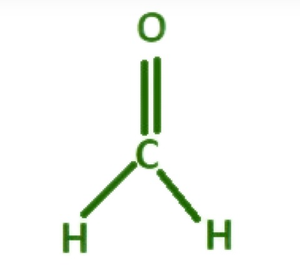 Question 1: Why is formaldehyde used as a good preservative?

It is widely used as a preservative because it is a combination of hydrogen, oxygen, and carbon, due its anti-bacterial properties.

Question 2: What is the molecular weight and density of formaldehyde?

Question 3: Is formaldehyde harmful to health?

It is a very toxic gas and its solution is highly volatile and together with the gas is very poisonous for the human. High exposure may cause cancer, it gives irritation to eyes, nose, etc. There is a high risk of explosion when its heated. It is highly flammable.

Question 4: What is the use of formaldehyde in vaccines?

Formaldehyde in vaccine used in producing some bacterial and viral vaccines, it is successfully used in the production of polio vaccine and to detoxify bacterial toxins. Formaldehyde CH2O is used as an antiseptic solution in very small concentrations because it possesses anti-bacterial and anti-fungal properties. It is also used in agriculture and medicine where it is used as a disinfectant, fungicide, fumigant and preservatives.

Question 5: How Formaldehyde is made?

Formaldehyde (CH2O), an organic compound, which is also known as methanol, the simplest of the aldehydes, It is also used in large quantities in a number of processes of chemical processing.

It is primarily formed by methanol vapor-phase oxidation, and is commonly sold as formalin, an aqueous solution of 37 percent.

Question 6: Is Formaldehyde soluble? and How formic acid can be converted to formaldehyde?

Yes Formaldehyde is soluble in water and acetone .

The formic acid is converted to formaldehyde Upon the addition of hydrogen, so that formaldehyde is more easily oxidized into formic acid by ambient oxygen. Formic acid has ability to be miscible with water and Its most organic solvents with polarity.