Foreground-Background Scheduling lies under the first type of the Event-Driven algorithm i.e. Simple priority-based. In this algorithm, 2 waiting lists are maintained one is Foreground and another one is Background. At first, every process enters on the Foreground list for its execution and stays there for a small period of time for its execution until the threshold time limit is reached, after this if the process is incomplete then that process enters in Background waiting list where it will be executed only when the foreground list is empty and in Background waiting list Round Robin scheduling algorithm is used to execute the process.

Completion Time for Foreground Tasks :
As earlier mentioned, foreground tasks include the periodic tasks therefore their completion time is the same as their absolute deadline.

Let Task Ti is the foreground task, and Ei is the amount of processing time required over every Pi period.
Hence,

If there are n periodic tasks (foreground tasks) i, e.

Therefore, the avg. time available for execution of background tasks in every unit of time is,

Therefore, the background task will take 1000 ms to complete.

Compute the completion time for the T4 when its processing time requirement is 200 ms to complete.

Solution: The first task is to find the summation of all the tasks in the Forehead. So, that we get the Total CPU utilization for forehead tasks

The second task is to subtract 1 with the summation. So, that we get to know that how much average time is available for the background task in every unit of time

And at last, we have to divide the eB by the above value

So, the total completion time of the background task is 4000 ms.

Overhead during context switch between Foreground and background waiting list: 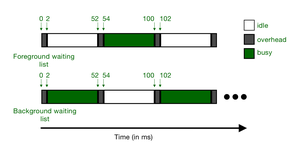 Example. Consider a task T1 in the foreground and its e1 is 50 ms and p1 is 100 ms and a task T2 in the background its e2 is 2000. Compute the completion time for background tasks when the overhead of every context switch is 2 ms.

Solution: From the above discussion, It is observed that e1 becomes 54 ms.

So, the completion time of the Background task is 4347.82 ms