In this article, we will look into how to make a beautiful Google Sign In screen and authenticate the same with Google.

Step 1: First create the flutter project in your  IDE.

Step 2: After that just remove the default code and start from scratch.

Step 3: Now just import the material library and call the runApp( ) function into the main function name as GoogleSignIn.

Step 4: Now make a stateful widget with the name ‘GoogleSignIn‘. 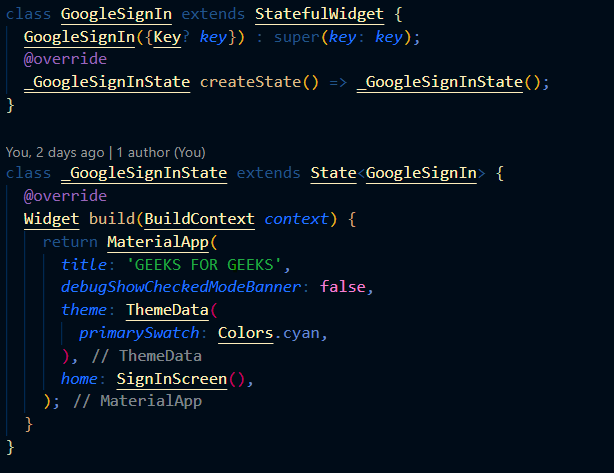 Here we return the MaterialApp( ) where  title property  is ‘GEEKS FOR GEEKS’, the home property is SignInScreen.

Now let’s create the SignInScreen() widget that we have given to the home property. Now, before creating SignInScreen(), we have to create a project on firebase.

Step 5: Now simply return the scaffold. In the scaffold body, we have a container for the gradient decorations as shown below: 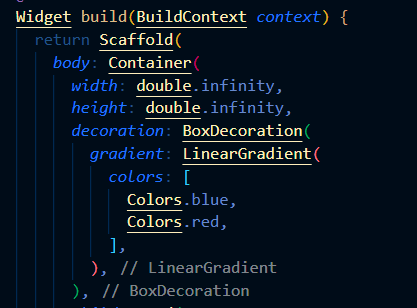 Step 6: Now there is a card child property that contains a column widget, In the column widget, we have a first widget text contain ‘ Geeks for Geeks’:

Step 7: The second widget is a material button which contains child property in which there is a Row, Row has is children’s, first there is a google logo and second is a text ‘ google sign in’, In on pressed we call the function signIn. Let’s create it. 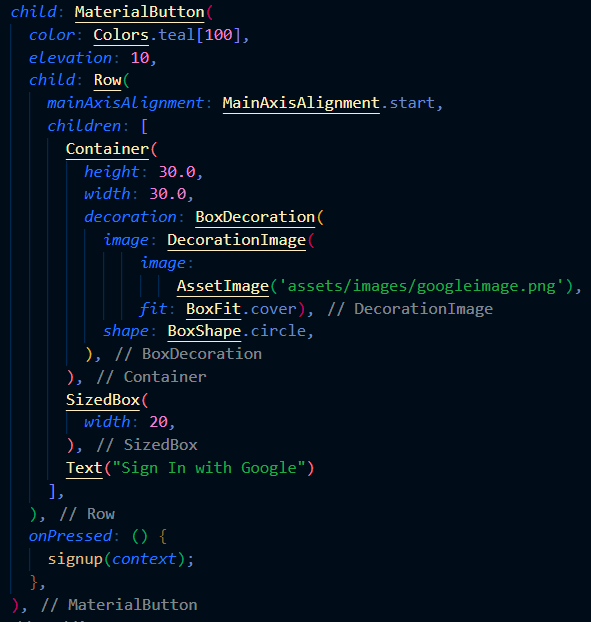 Our screen contains in the center “google sign in ” and below this there is a button of signup by which we have a sign up successfully and move to the home screen.

Step 8: Now just import the auth and google_sign up from the library.

Step 9: Now we have created an auth instance of type FirebaseAuth. We have made a request of GoogleSignIn, It signup by user credentials. If the result is not Null, we simply call the pushReplacement function to navigate to the home screen.

See the code below:

Note : Use the latest available version of the package.

Step 10: Our home screen contains only a simple text “home screen ” with an appbar titled ‘GEEKS FOR GEEKS’ in green color. 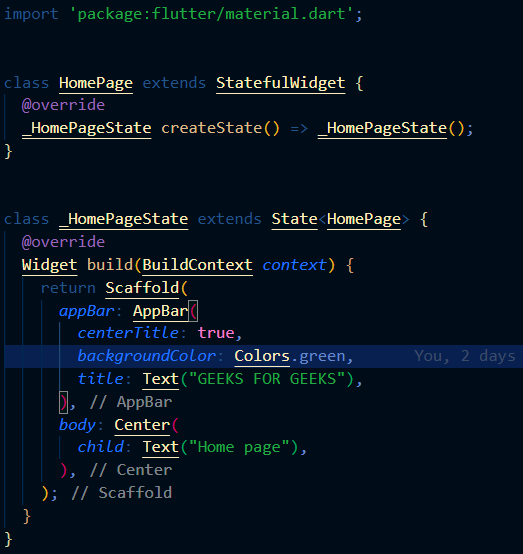 This is how the home screen will look like:

Complete Interview Preparation
View Details
System Design-Live Classes for Working Professionals
View Details
Most popular in Android
Most visited in Dart
We use cookies to ensure you have the best browsing experience on our website. By using our site, you acknowledge that you have read and understood our Cookie Policy & Privacy Policy