Liquids and gases play an important role in our life. The earth’s atmosphere is so big as it appears like an ocean of gases. About 76% of the surface of the earth is covered with water. We cannot think of a life without gases (air) and water, Liquids and are collectively known as fluids. A substance that flows under the action of an applied force and does not have a shape of its own is known as a liquid. The study of fluids which is at rest is known as hydrostatic or fluid statics. The study of hydrodynamics. In this article, we will have the study of liquids only.

The force can be applied in any direction with respect to the surface on solids. But in fluids, the force may be applied at a right angle (or perpendicular) to the liquid surface. This is because fluids (liquids and gases) at rest cannot sustain a tangential force. Therefore, we state the pressure acting on the fluid instead of force.

The pressure (P) is defined as the magnitude of the force acting perpendicular to the surface of an object per surface area of the object. If a constant force of magnitude F acts normally on a surface area A, then pressure acting on the surface is given by,

Device used to measure pressure in a fluid

A simple device used to measure pressure in a fluid is shown in figure 1. It consists of an evacuated cylinder. A piston of area A is fitted into the cylinder. A spring is connected between the piston and the bottom of the cylinder.

The pressure is a scalar quantity. A definite direction is not associated with pressure because  hydrostatic pressure is transmitted equally in all directions when force is applied 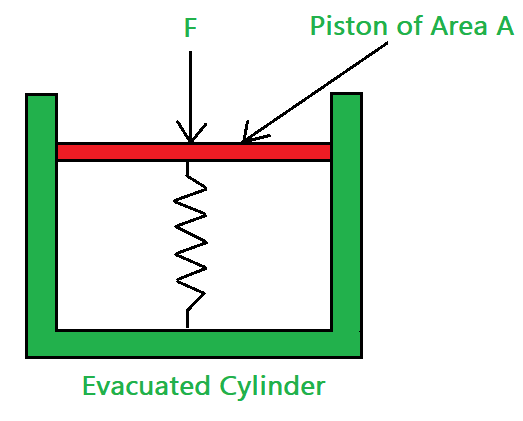 where m is the mass and V is the volume.

Problem 1: Name the device which is used to measure the atmospheric pressure.

Barometer is the device which is used to measure the atmospheric pressure.

R .D. of gold =Density of gold / Density of water

Problem 4: A knife is applying a force of 20 N on a table. If the area of the point of the knife is 0.1 mm2, calculate the pressure applied on the table.

Problem 5: What do you mean by torr?

Pressure exerted by a mercury column of 1 mm height is known is torr.