Flask is a backend web framework based on the Python programming language. It basically allows creating web applications in a Pythonic syntax and concepts. With Flask, we can use Python libraries and tools in our web applications. Using Flask we can set up a webserver to load up some basic HTML templates along with Jinga2 templating syntax. In this article, we will see how we can render the HTML templates in Flask.

Setup Flask: Setting up Flask is quite easy. We can use a virtual environment to create an isolated environment for our project and then install the Python packages in that environment. After that, we set up the environment variables for running Flask on the local machine. This tutorial assumes that you have Python environment configured, if not please follow through for setting up Python and pip on your system. Once you are done, you are ready to develop Flask applications.

Setting up the Virtual Environment: To set up a virtual environment, we can make use of Python Package manager “pip” to install the “virtualenv” package.

This will install the package “virtualenv” on your machine. The pip command can be different on the version of your Python installed so please do look at the different syntax of the pip for your version here.

Here, venv is the name of the environment, after this command has been executed, you will see a folder named “venv” in the current folder. The name “venv” can be anything(“env”) you like but it is standard to reference a virtual environment at a production level.

Activating Virtual Environment: Now after the virtual env has been set up and created, we can activate by using the commands in CMD\Powershell or Terminal:

Note: You need to be in the same folder as the “venv” folder is.

This should activate the virtualenv with “(venv)” before the command prompt. 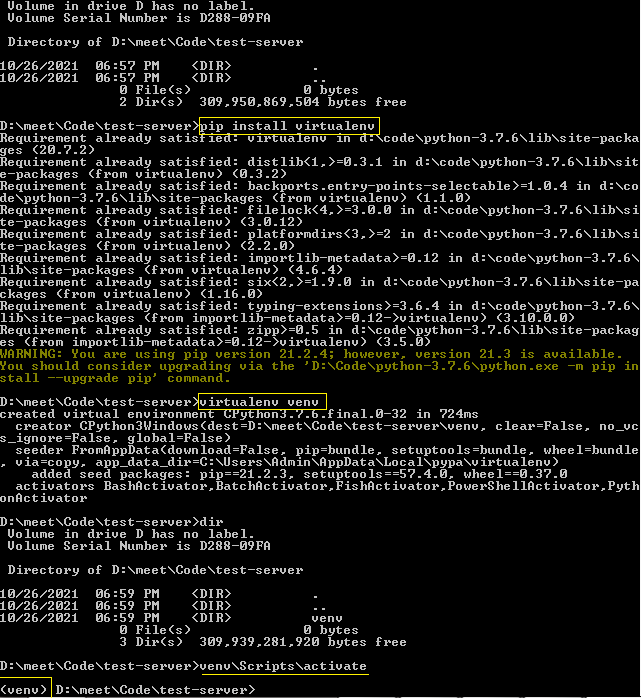 Screenshot of the entire virtualenv setup

As we can see we have successfully created the virtualenv in Windows Operating System, in Linux/macOS the process is quite similar. The (venv) is indicating the current instance of the terminal/CMD is in a virtual environment, anything installed in the current instance of a terminal using pip will be stored in the venv folder without affecting the entire system.

Installing Flask: After the virtual environment has been set up, we can simply install flask with the following command:

This should install the actual Flask python package in the virtual environment.

Adding Flask to Environment Variables: We need to create an app for the Flask to set it as the starting point of our application. We can achieve this by creating a file called “server.py” you can call this anything you like, but keep it consistent with other flask projects you create. Inside of the server.py paste the following code:

This is the code for actually running creating the Flask app. This is so-called the entry point of a Flask web server. As you can see we are importing the Flask module and instantiating with the current file name in “Flask(__name__)”. Hence after the check, we are running a function called run().

After this, we need to set the file as the Flask app to the environment variable.

Now, this will set up the Flask starting point to that file we created, so once we start the server the Flask server will find the way to the file “server.py”

To run the server, enter the command :

This will run the server and how smartly it detected the server.py file as our actual flask app. If you go to the URL “http://localhost:5000”, you would see noting than a Not Found message this is because we have not configured our webserver to serve anything just yet. You can press CTRL + C to stop the server 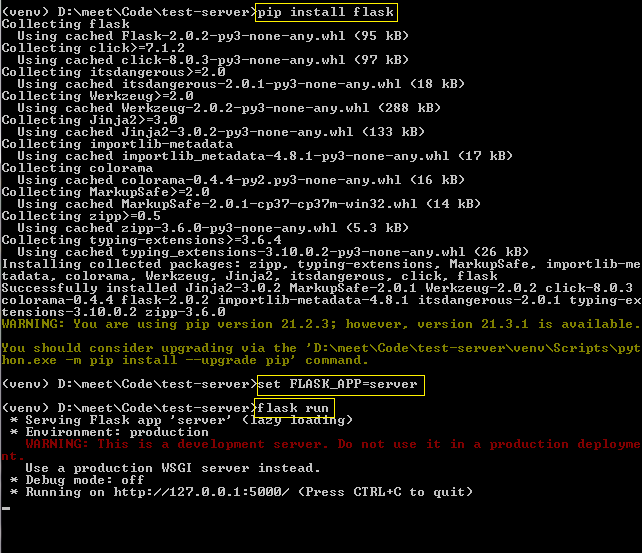 Flask set up for webserver

Adding Routes and Rendering Templates: Now, we need a way to actually link the template with a specific route or URL. This means whenever the user goes to a specific URL then a specific template should be rendered or generated. Now, we need to change the “server.py” with the following:

We have imported the render_template function from the Flask module and added a route.

What is a route?

A route is a mapping of a URL with a function or any other piece of code to be rendered on the webserver. In the flask, we use the function decorate @app.route to indicate that the function is bound with the URL provided in the parameter of the route function.

Creating the basic route: In this case, we are binding the URL “/” which is the base URL for the server with the function “index”, you can call it whatever you like but it makes more sense to call it index here. The function simply returns something here it calls the function render_template. The render_template finds the app by default in the templates folder. So, we just need to provide the name of the template instead of the entire path to the template. The index function renders a template index.html and hence we see the result in the browser. 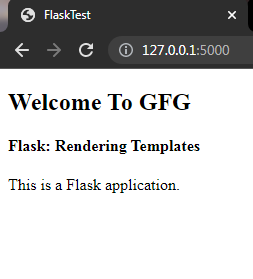 Now, we’ll create a new route for demonstrating the usage of Jinga template. We need to add the route, so just add one more chunk of the code to the “server.py file”

Now, this might look pretty easy to understand, we are simply creating a route “/<name>” which will be bound to the welcome function. The “<name>” is standing for anything after the “/”. So we take that as the parameter to our function and pass it to the render_template function as name. So, after passing the variable name in the render_template function, it would be accessible in the template for us to render that variable. You can even perform an operation on the variable and then parse it.

No, we need to create another template called “welcome.html” inside the template folder. This file should can contain the following markup 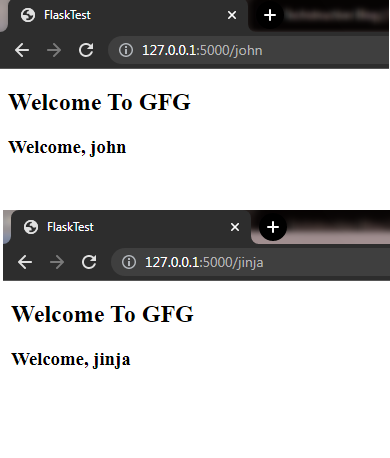 Now, we need a way to actually inherit some templates instead of reusing them, we can do that by creating the blocks in Jinga. They allow us to create a template block and we can use them in other templates with the name given to the block.

So, let us re-use our “index.html” and create a block in there.. T do that we use “{% block name %} to start the block, this will take everything above it and store in a virtual block of template, to end the block you simply use “{% enblock %}” this will copy everything below it.

So, here we are not including the <p> tags as everything below the {% endblock %} and everything above the {% block body %} tag is copied. We are also using absolute urls. The urls are dynamic and are quite easy to understand. We enclose them in “{{ }}” as part of Jinga2 syntax. The url_for function reverses the entire URL for us, we just have to pass the name of the function as a string as a parameter to the function.

Now, we’ll create another template to reuse this created block “body”, let’s create the template “home.html” with the following contents:

This looks like a two-liner but will also include the index.html. This is by using the {% include %} tags, they parse the block into the mentioned template. After this we can add the things we want.

Finally the piece left here is the route to home.html, so let’s create that as well. Let’s add another route to the “server.py file”

So, this is a route binded to the “/home” URL with the home function that renders the template “home.html” that we created just right now.

As, we can see the url generated is dynamic, w\otherwise we would have to hardcode both the template page paths. And also the block is working and inheriting the template as provided in the base templates.

Inducing Logic in Templates: We can use for loops, if conditions in templates. this is such a great feature to leverage on. We can create some great dynamic templates without much of a hassle. Let us create a list in python and try to render that on a HTML template.

Using for loops in templates: For that we will create another route, this time at “/about”, this route will bind to the function about that renders the template “about.html” but we will add some more things before returning from the function. We will create a list of some dummy strings and then parse them to the render_template function.

So, we have created the route at “/about” bound to the about function. Inside of that function, we are first creating the list “Sites” with some dummy strings and finally while returning, we parse tehm to the render_template function as sites, you can call anything as you like but remember to use that name in the templates. Now, to creating the templates, we’ll create the template “about.html” with the following contents:

We can use for loops in templates enclosed in “{% %}” we can call them as a regular pythonic way. The sites is the variable(list) which we parsed in the route function. We can again use the iterator as a variable enclosed in “{{ }}”. This is like joining the puzzle pieces, the values of variables are accessed with “{{ }}”, any other structures or blocks are enclosed in “{% %}.

Now to make it more accessible you can add its URL to the index.html like so:

This is not mandatory but it creates an accessible link for ease. 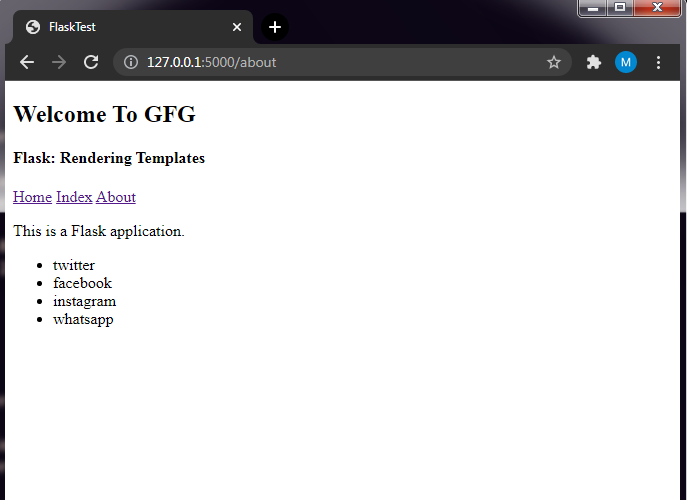 Demonstrating for loop in templates

As we can see it has dynamically created all the lists in the template. This can be used for fetching the data from the database if the app is pridcution ready. Also, it can be used to create certain repetitive tasks or data which is very hard to do them manually.

Using if else in templates: We can even use if-else conditions in flask templates. Similar to the syntax for the for loops we can leverage that to create dynamic templates. Let’s see an example of a role for a website.

Let’s build the route for the section contact. This URL is “contact/<role>”, which is bound to the function contact which renders a template called “contacts.html”. this takes in the argument as role. Now we can see some changes here, this are just semantical changes nothing new, we can use the variable person as a different name in the template which was assigned as the values of role.

So, this creates the route as desired and parses the variable role as a person to the template. Now let us create the template.

So, in the template, we are checking the value of the variable person which is obtained from the URL and parsed from the render_template function. The if else syntax is similar to python with just “{% %}” ienclosed. The code is quite self-explanatory as we create if-elif and else ladder, checking for a value and creating the HTML elements as per the requirement.

So, we can see that the template is rendering the contents as per the role variable passed in the URL. Don’t try to create a URL link for this as it would not work since we need to enter the role variable manually. There needs to be some workaround done to use it.

So that was about using and rendering the templates in Flask. We have leveraged the Jinja templating syntax with Python to create some dynamic templates.

Complete Interview Preparation
View Details
System Design-Live Classes for Working Professionals
View Details
Most popular in Python
Most visited in Web Technologies
We use cookies to ensure you have the best browsing experience on our website. By using our site, you acknowledge that you have read and understood our Cookie Policy & Privacy Policy