Finite and Infinite Recursion with examples

The process in which a function calls itself directly or indirectly is called Recursion and the corresponding function is called a Recursive function.
Using Recursion, certain problems can be solved quite easily. Examples of such problems are Towers of Hanoi (TOH), Inorder/Preorder/Postorder Tree Traversals, DFS, etc.

Recursion can be further classified into two kinds, depending on when they terminate:

Below is an implementation to demonstrate Finite Recursion.

The recursion tree for the above recursive function looks like this. 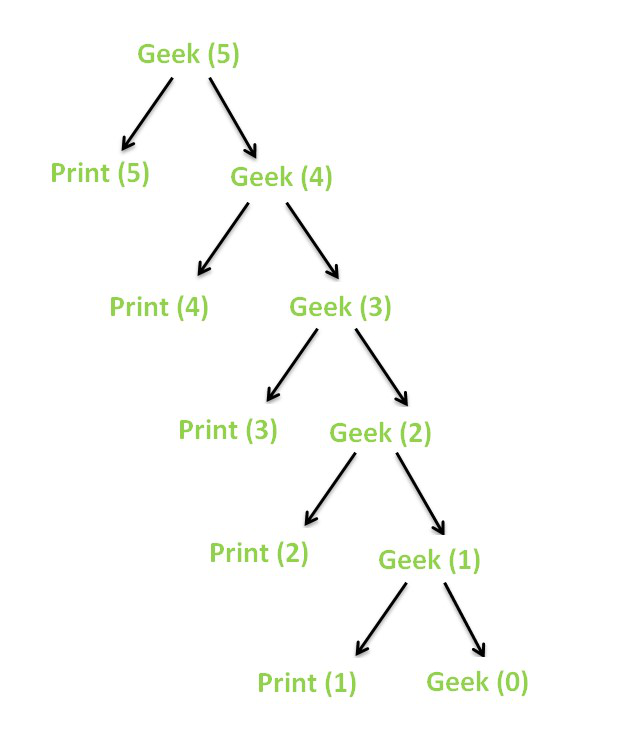 When the value of N becomes 0, because of the base condition, the recursion terminates.

Infinite Recursion occurs when the recursion does not terminate after a finite number of recursive calls. As the base condition is never met, the recursion carries on infinitely.

Below is an implementation to demonstrate Infinite Recursion.

The recursion tree for the above recursive function looks like this. 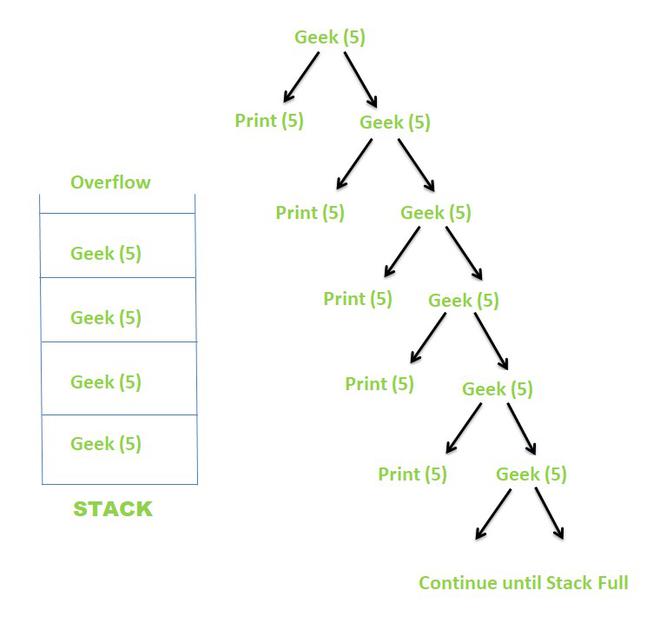 Since the value of N never becomes 0, so the recursion never terminates. Instead, the recursion continues until the implicit stack becomes full which results in a Stack Overflow. Some compilers directly give the output as Segmentation Fault (Core Dumped), while others may abnormally terminate for some value and then show Segmentation fault.

Previous
Maximum range subarray for each index in Array such that A[i] = min(A[L], A[L+1], … A[R])
Next
Make N pairs from Array as (X, Y) coordinate point that are enclosed inside a minimum area rectangle
Related Articles
1. Find Nth item distributed from infinite items of infinite types based on given conditions
2. Why is Tail Recursion optimization faster than normal Recursion?
3. Measure one litre using two vessels and infinite water supply
4. Find the index of first 1 in an infinite sorted array of 0s and 1s
5. Find position of an element in a sorted array of infinite numbers
6. Sum of series M/1 + (M+P)/2 + (M+2*P)/4 + (M+3*P)/8......up to infinite
7. Find minimum moves to reach target on an infinite line
8. Minimum moves to reach target on a infinite line | Set 2
9. Minimum steps needed to cover a sequence of points on an infinite grid
10. Shortest distance between two nodes in an infinite binary tree
Article Contributed By :