Given an integer N, the task is to find the closest number to N which is greater than N and contains at most one non-zero digit.

Approach: The problem can be solved based on the following observations. 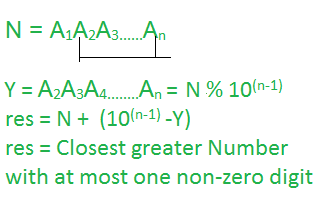 My Personal Notes arrow_drop_up
Next
Extract maximum numeric value from a given string | Set 1 (General approach)
Recommended Articles
Page :
Largest number less than N with digit sum greater than the digit sum of N
04, Dec 18
Least Greater number with same digit sum
07, Nov 18
Largest even digit number not greater than N
21, Mar 18
Count numbers with difference between number and its digit sum greater than specific value
23, Jun 17
Find the remainder when First digit of a number is divided by its Last digit
20, Aug 19
Find the number closest to n and divisible by m
14, Aug 17
Find number from given list for which value of the function is closest to A
15, Nov 18
Find a triplet in an array whose sum is closest to a given number
03, Jul 19
Find the closest and smaller tidy number
28, May 17
Find the Number which contain the digit d
26, Mar 18
Find next greater number with same set of digits
17, Jul 14
Find nth number that contains the digit k or divisible by k.
28, Feb 18
Find the middle digit of a given Number
20, May 20
Find the Next perfect square greater than a given number
21, Sep 18
Find the minimum number possible by changing at most one digit
30, Apr 20
Find minimum possible digit sum after adding a number d
21, Oct 18
Find a N-digit number such that it is not divisible by any of its digits
26, Mar 20
Program to find last digit of n'th Fibonnaci Number
26, Jul 16
Find a N-digit number such that it is not divisible by any of its digits
08, Apr 20
Find a number K such that exactly K array elements are greater than or equal to K
09, Oct 20
Find last five digits of a given five digit number raised to power five
08, Mar 19
Find the winner of the game based on greater number of divisors
01, May 19
Find the Largest N digit perfect square number in Base B
19, May 20
Find a number K having sum of numbers obtained by repeated removal of last digit of K is N
28, Sep 20
Article Contributed By :