Find coordinates of a prime number in a Prime Spiral

Introduction
The Ulam spiral is a graphical depiction of the set of prime numbers, devised by mathematician Stanislaw Ulam. It is constructed by writing the positive integers in a square spiral and specially marking the prime numbers.You can read more about it here.
But we are going to compute on the alternate version of this spiral where the prime numbers are lined up in the spiral rather than natural numbers as in the original Ulam’s spiral. 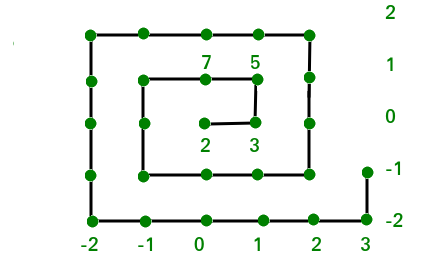 The prime numbers are written in a spiral form starting from the origin (0, 0) and moving as shown in the diagram above. The numbers shown in the right column and the bottom row are the column numbers and row numbers respectively ( i.e. y and x coordinates)
The objective is to find the position (x and y coordinates) of a given prime number.
Examples: 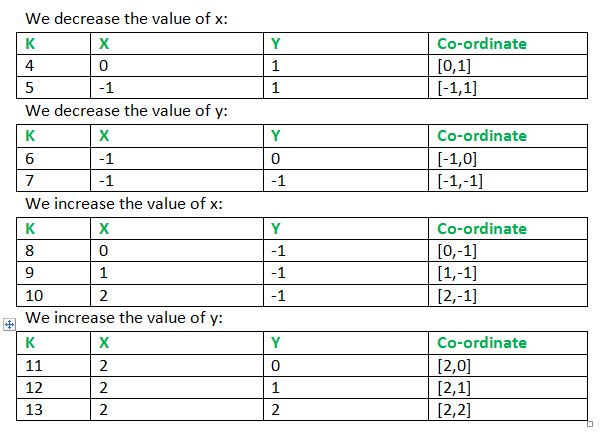 From the above computations, we observe that the operations are same for a batch of steps, e.g. at first K = 2 & 3 follow one where x is increased by 1 and then y by 1. Next in K= 4, 5, 6, 7 for 4 and 5, x is decreased and y is decreased in K = 6 and 7. Again From K = 8, 9 and 10, x is increased in repeated steps and 11, 12, 13 consists of decreasing y.
Each step can be classified into a batch and the size of batch increases by 1 after two runs. After a run, the operation is switched from y to x or vice versa and after every two batch runs the addition operation is switched to subtraction and vice versa. The following table explains it. 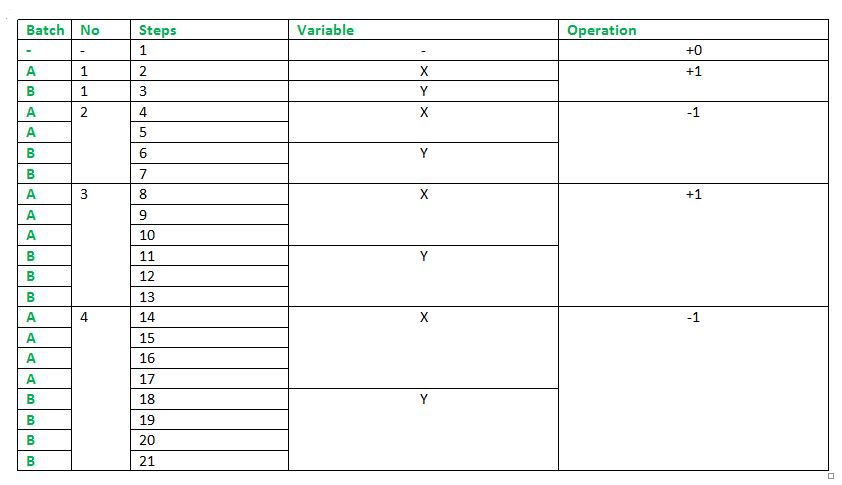 This article is contributed by Pritom Gogoi. If you like GeeksforGeeks and would like to contribute, you can also write an article using write.geeksforgeeks.org or mail your article to review-team@geeksforgeeks.org. See your article appearing on the GeeksforGeeks main page and help other Geeks.
Please write comments if you find anything incorrect, or you want to share more information about the topic discussed above.