FilePathField in Django Forms is a string field, for input of path of a particular file from server. It is used for select inputs from the user. One needs to specify which folders should be used in FilePathField and field displays the inputs in form of a select field. The default widget for this input is Select.
FilePathField has following required and optional arguments:

Illustration of FilePathField using an Example. Consider a project named geeksforgeeks having an app named geeks.

Here we are importing that particular form from forms.py and creating an object of it in the view so that it can be rendered in a template.

Now, to initiate a Django form you need to create home.html where one would be designing the stuff as they like. Let’s create a form in home.html. 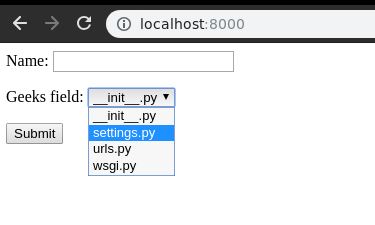 Thus, an geeks_field FilePathField is created by replacing “_” with ” “. It is a field to input paths of file from the user.

FilePathField is used for input of paths of file in the database. One can input Files from particular folder etc. Till now we have discussed how to implement FilePathField but how to use it in the view for performing the logical part. To perform some logic we would need to get the value entered into field into a python string instance.
In views.py,

Being a select field it accepts a select input only otherwise validation errors will be seen. Now let’s try selecting a choice from the field. 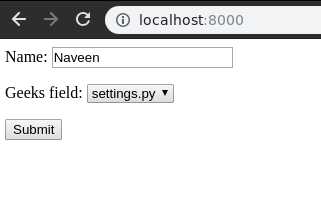 Date data can be fetched using corresponding request dictionary. If method is GET, data would be available in request.GET and if post, request.POST correspondingly. In above example we have the value in temp which we can use for any purpose.

Core Field arguments are the arguments given to each field for applying some constraint or imparting a particular characteristic to a particular Field. For example, adding an argument required = False to FilePathField will enable it to be left blank by the user. Each Field class constructor takes at least these arguments. Some Field classes take additional, field-specific arguments, but the following should always be accepted: