FileField in Django Forms is a input field for upload of files. The default widget for this input is ClearableFileInput. It normalizes to: An UploadedFile object that wraps the file content and file name into a single object. It can validate that non-empty file data has been bound to the form. This article revolves about how to upload files with Django forms and how can you save that to the database.

Illustration of FileField using an Example. Consider a project named geeksforgeeks having an app named geeks. 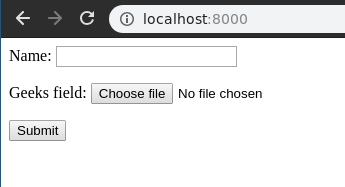 Thus, an geeks_field FileField is created by replacing “_” with ” “. It is a field to input files from the user.

How to upload Files using FileField ?

FileField is used for input of files in the database. One can input Email Id, etc. Till now we have discussed how to implement FileField but how to use it in the view for performing the logical part. To perform some logic we would need to get the value entered into field into a python string instance.
FileField is different from other fields and it needs to be handled properly. As stated above, data fetched from a FileField would be stored in request.FILES object.
In views.py,

Let’s explain what this code does, this code saves the file uploaded by the user in upload folder of geeks directory. Whenever a file is uploaded, it is saved to request.FILES object with key as name of the field. So we have created a function which handles the uploaded file, you can choose your own use for the file either saving it to database or operating on it or any other logical operation. Let’s try saving a file to the upload folder. 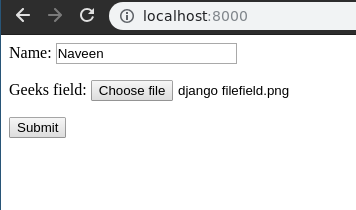 It has loaded successfully and file is saved in upload folder of geeks app.

Core Field arguments are the arguments given to each field for applying some constraint or imparting a particular characteristic to a particular Field. For example, adding an argument required = False to FileField will enable it to be left blank by the user. Each Field class constructor takes at least these arguments. Some Field classes take additional, field-specific arguments, but the following should always be accepted: