File caching enhances I/O performance because previously read files are kept in the main memory. Because the files are available locally, the network transfer is zeroed when requests for these files are repeated. Performance improvement of the file system is based on the locality of the file access pattern. Caching also helps in reliability and scalability.

Cache Location: The file might be kept in the disc or main memory of the client or the server in a client-server system with memory and disk.

Server’s Disk: It is always the original location where the file is saved. There is enough space here in case that file is modified and becomes longer. Additionally, the file is visible to all clients.

Server’s Main Memory: The question is whether to cache the complete file or only the disk blocks when the file is cached in the server’s main memory. If the full file is cached, it can be stored in contiguous locations, and high-speed transmission results in a good performance. Disk block caching makes the cache and disc space more efficient.
Standard caching techniques are employed to overcome the latter issue. When compared to memory references, cache references are quite rare. The oldest block can be picked for eviction in LRU (Least Recently Used). The cache copy can be discarded if there is an up-to-date copy on the disk. The cache data can also be written to the disk. Clients can easily and transparently access a cached file in the server’s main memory. The server can easily keep disks and main memory copies of the file consistent. Only one copy of the file exists in the system, according to the client.

Client’s disk: The data can also be saved on the client’s hard drive. Although network transfer is reduced, in the event of a cache hit, the disk must be accessed. Because the changed data will be available in the event of data loss or a crash, this technique improves reliability. The information can then be recovered from the client’s hard drive.
Even if the client is disconnected from the server, the file can still be accessed. Because access to the disk may be handled locally, there is no need to contact the server, this enhances scalability and dependability. 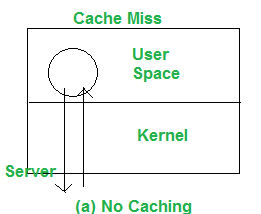 Client’s Main Memory: Once it is agreed that the files should be cached in the client’s memory, caching can take place in the user process’s address space, the kernel, or a cache manager as a user process.
The second alternative is to cache the files in the address space of each user process, as shown:

The system-call library is in charge of the cache. The files are opened, closed, read, and written during the process execution. The library saves the most frequently used files so that they can be re-used if necessary. The updated files are returned to the server once the operation has been completed. When individual processes open and close files regularly, this technique works well.
It’s fine for database managers, but not for programmers working in circumstances where the files might not be accessed again.
The file can be cached in the kernel instead of the user’s process address space, as shown. This technique, however, necessitates many systems calls to access the file for each cache hit.

A separate user-level cache manager can be used to cache the files. As a result, the kernel no longer has to maintain the file system code, and it becomes more isolated and flexible. The kernel can decide on the allocation of memory space for the program vs. cache on run time. The kernel can store some of the cached files in the disk if the cache manager runs in virtual memory, and the blocks are brought to the main memory on cache hit.

When the cache is located on the client’s node, numerous users can access the same data or file at the same time in a file system. If all caches contain the same most current data, they are considered to be consistent. It’s possible that the data will become inconsistent if some users modify the file. The distributed system that uses a DFS must keep its data copies consistent.
Depending on when to propagate changes to the server and how to validate the authenticity of cache data, many consistency strategies are provided. Write-through, write-on-close, and centralized control are the three types.
When the cache is located on the client’s node & one user writes data to cache, it must also be visible to the other users as well. The written policy determines that when the writing is performed.

There are four cache update policies:

When a cache’s data is modified, the modification propagation policy tells when the master copy of the file on the server node is updated. It provides no information about when the file data in other nodes’ caches are updated. Data from a file may be stored in the caches of many nodes at the same time.
When another client alters the data corresponding to the cache item in the master copy of the file on the server, the client’s cache entry becomes outdated. It’s required to check whether the data cached at a client node matches the master copy. If this is not the case, the cached data must be invalidated and a new version of the data must be requested from the server.
To check cache data’s Validity, 2 schemes are :