Before discussing Fast R-CNN, let’s look at the challenges faced by R-CNN

Fast R-CNN works to solve these problems. Let’s look at the architecture of Fast R-CNN

First, we generate the region proposal from selective search algorithm. This selective search algorithm generates up to approximately 2000 region proposal. These region proposals (RoI projections) combines with input image passed into a CNN network. This CNN network generates the convolution feature map as output. Then for each object proposal, a Region of Interest (RoI) pooling layer extracts the feature vector of fixed length for each feature map. Every feature vector is then passed into twin layers of softmax classifier and Bbox regression for classification of region proposal and improve the position of the bounding box of that object.

Fast R-CNN is experimented with three pre-trained ImageNet networks each with 5 max pooling layer and 5-13 convolution layers (such as VGG-16). There are some changes proposed in these pre-trained network, These changes are:

RoI pooling is the novel thing that was introduced in Fast R-CNN paper. Its purpose is to produce uniform, fixed-size feature maps from non-uniform inputs (RoIs).
It takes two values as inputs:

Let’s consider we have 8*8 feature maps, we need to extract an output of size 2*2. We will follow the steps below. 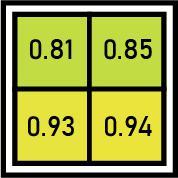 where Lcls  is classification loss, Lloc is localization loss. lambda is balancing parameter and u is a function (the value of u=0 for background, otherwise  u=1) to make sure that loss is only calculated at when we need to define bounding box. Here, Lcls is the log loss and Lloc  is defined as

Advantages of Fast R-CNN over R-CNN