FaceNet is the name of the facial recognition system that was proposed by Google Researchers in 2015 in the paper titled FaceNet: A Unified Embedding for Face Recognition and Clustering. It achieved state-of-the-art results in the many benchmark face recognition dataset such as Labeled Faces in the Wild (LFW) and Youtube Face Database.
They proposed an approach in which it generates a high-quality face mapping from the images using deep learning architectures such as ZF-Net and Inception. Then it used a method called triplet loss as a loss function to train this architecture. Let’s look at the architecture in more detail.

FaceNet employs end to end learning in its architecture. It uses ZF-Net or Inception as its underlying architecture. It also adds several 1*1 convolutions to decrease the number of parameters. These deep learning models outputs an embedding of the image f(x) with L2 normalization performed on it. These embeddings then passed into the loss function to calculate the loss. The goal of this loss function is to make the squared distance between two image embedding is independent of image condition and pose of the same identity is small, whereas the squared distance between two images of different identity is large. Therefore a new loss function called Triplet loss is used. The idea of using triplet loss in our architecture is that it makes the model to enforce a margin between faces of different identities.

Triplet loss:
The embedding of an image is represented by f(x) such as x

If triplets are easily satisfied above property then it would not helping training, so it is important to have the triplets that violate above equation.

Triplet selection :
In order to ensure faster learning, we need to take triplets that violate the equation above. This means for given

is minimum . It is computationally expensive to ggenerate triplets based on whole training set. There are two methods of generating triplets.

Results:
This model uses 4 different types of architecture on Labeled Faces in the wild and Youtube Face DB dataset. These 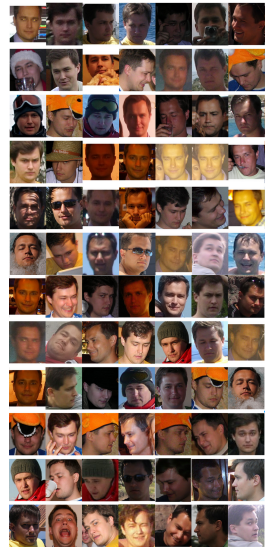 A result of Face clustering (clustering of images of the same person) from FaceNet paper shows that the model is invariant to occlusion, pose, lighting and even age, etc.