Morphology is the study of phenotypes character or the exterior character with respect to other parts. Morphology of plants deals with the morphology of plants and we study different parts of plants. Fabaceae (pea family) is a huge group of angiosperms. It is otherwise called Leguminosae and the plants are generally known as vegetables. It is generally conveyed everywhere. It incorporates numerous significant heartbeats like peas, soybean, chickpeas, and so forth. 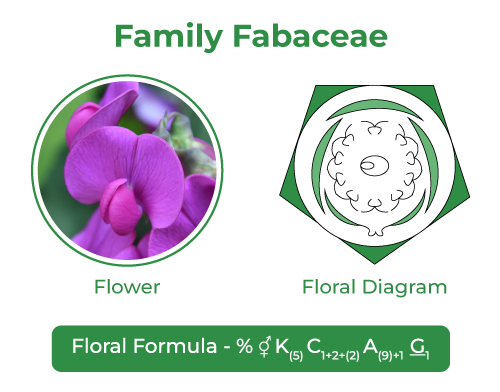 This family was before called Papilionoideae, a subfamily of the Leguminosae family.

Question 1: Fabaceae was before known as?

Question2: The gynoecium consists of many free pistils in flowers?

Question 3: Vexillary aestivation is characteristic of the family?

The petals are overlapping (imbricate) in the bud with the posterior petal (called the banner or flag) outermost (i.e., exterior) in position. The two lowermost petals are joined together called the keel petals. The lateral petals are often called the wings. This arrangement of floral whorls is called vexillary aestivation. So, the correct answer is ‘Fabaceae‘.

Question 4: Phyllode is present in?

Phyllode is present in Australian Acacia. It is a modification of the leaf in which lamina is absent and the petiole becomes flattened and performs the function of food synthesis.

When a flower can be divided into two similar halves only in one particular vertical plane, it is zygomorphic, e.g. pea, Gulmohar, bean, etc.