Explain the working of Node.js

Node.js is an open-source backend javascript runtime environment. It is a used as backend service where javascript works on the server-side of the application. This way javascript is used on both frontend and backend. Node.js runs on chrome v8 engine which converts javascript code into machine code, it is highly scalable, lightweight, fast, and data-intensive.

Working of Node.js: Node.js accepts the request from the clients and sends the response, while working with the request node.js handles them with a single thread. To operate I/O operations or requests node.js use the concept of threads. Thread is a sequence of instructions that the server needs to perform. It runs parallel on the server to provide the information to multiple clients. Node.js is an event loop single-threaded language. It can handle concurrent requests with a single thread without blocking it for one request.

Non-blocking I/o: Non-blocking i/o  means working with multiple requests without blocking the thread for a single request. I/O basically interacts with external systems such as files, databases. Node.js is not used for CPU-intensive work means for calculations, video processing because a single thread cannot handle the CPU works.

Libuv is an open-source library built-in c++. It has a strong focus on asynchronous and  I/O, this gives node access to the underlying computer operating system, file system, and networking.

Event queue: As soon as the request is sent the thread places the request into a queue. It is known as an event queue. The process like app receiving HTTP request or server or a timer will emit event as soon as they are done with the work and event loop will pick up these events and call the callback functions that are associated with each event and response is sent to the client.

The event loop is an indefinite loop that continuously receives the request and processes them. It checks the queue and waits for the incoming request indefinitely.

The thread pool size can be change: 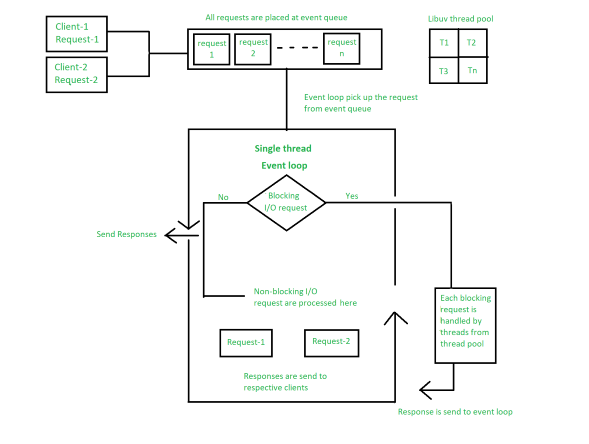 Complete Interview Preparation
View Details
System Design-Live Classes for Working Professionals
View Details
Most popular in Blogathon
Most visited in Node.js
We use cookies to ensure you have the best browsing experience on our website. By using our site, you acknowledge that you have read and understood our Cookie Policy & Privacy Policy