Explain difference between Bootstrap and Foundation frameworks in CSS

In this article, we will know about the Foundation & Bootstrap frameworks in CSS, and will also understand their implementation through the example along with discussing the major differences between them.

Foundation 6: A Foundation is an open-source & responsive front-end framework built by ZURB in September 2011, that makes it easy to design beautiful responsive websites, apps, and emails that look amazing & can be accessible to any device. It is used by many companies such as Facebook, eBay, Mozilla, Adobe, and even Disney. The framework is built on Saas-like bootstrap. It is more sophisticated, flexible, and easily customizable. It also comes with CLI, so it’s easy to use it with module bundlers. It offers the Fastclick.js tool for faster rendering on mobile devices.

A Foundation has a slightly more advanced interface compared to other framings. The responsive menu is one of its important properties. The menu is inconceivable when it comes to functionality and can also be freely baptized using CSS. This responsive architecture allows contrivers to beget elegant websites with added of a design-it-yourself approach.

Example: This example illustrates the use of the CSS Foundation’s classes for making the blogging webpage. 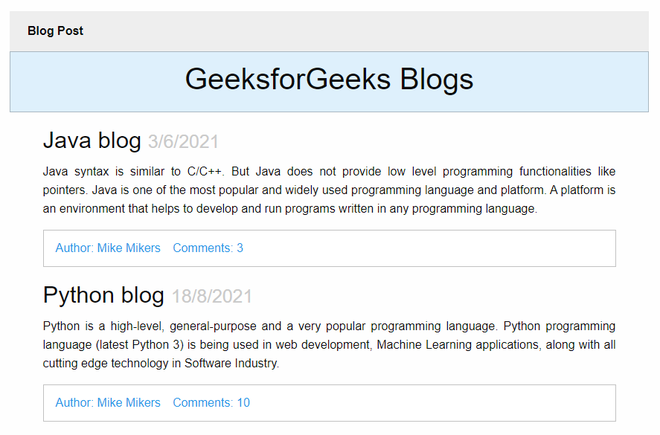 Customization menu of Foundation: There are several ways to customize the menu using Foundation such as the Basic menu, alignment menu, vertical menu, simple menu, nested menu, etc, for proving the flexibility along with making it an all-purpose navigation component.

Example: This example illustrates the CSS Foundation to make use of the customize column for the menu.

A Bootstrap is a free and open-source collection of CSS and JavaScript/jQuery code used for creating dynamic websites layout and web applications. It was designed by former Twitter retainers Mark Toto and Jacob Thornton. Bootstrap is one of the most popular front-end frameworks which has really a nice set of predefined CSS codes. Bootstrap uses different types of classes to make responsive websites. Bootstrap 5 was officially released on 16 June 2020 after several months of redefining its features. It is used by many companies such as Vogue, Indeed, Walmart, Code Academy and more.

Example: This example illustrates the simple use of the Bootstrap framework for making the pill navigation menu.

Difference between Bootstrap 5 and Foundation 6:

Complete Interview Preparation
View Details
System Design-Live Classes for Working Professionals
View Details
Data Structures & Algorithms- Self Paced Course
View Details
Most popular in Bootstrap
Most visited in Difference Between
We use cookies to ensure you have the best browsing experience on our website. By using our site, you acknowledge that you have read and understood our Cookie Policy & Privacy Policy