We, humans, are Homo sapiens, a culture-bearing upstanding strolling species that lives on the ground and probably previously developed in Africa around 315,000 years back. Human development is the transformative interaction inside the historical backdrop of primates that prompted the rise of Homo sapiens as a particular type of the hominid family, which incorporates the extraordinary chimps. This cycle included the continuous improvement of qualities like human bipedalism and language, as well as interbreeding with other hominins, which show that human development was not direct yet a web. To comprehend how Homo sapiens in the long run advanced from these more established genealogies of hominins, the gathering including present-day people and our nearest wiped-out family members and precursors, Scientists are uncovering bones and stone apparatuses, diving into our genes and reproducing the changing conditions that aided shape our ancestor’s reality and guide their development and evolution.

“Human” is from the Latin humanus, the descriptive type of homo. Humans with prior gorillas by drop turned out to be clear solely after 1859. With the distribution of Charles Darwin’s – On the Origin of Species, in which he contended for the possibility of the evolution of new species from prior ones. Darwin applied the hypothesis of advancement and sexual selection to people in his 1871 book The Descent of Man, and Selection in Relation to Sex.

As the actual remaining parts of genuine ancient individuals, Fossils let us most know what they like throughout everyday life. Be that as it may, bones or teeth are as yet dependent upon a lot of translation. While human remaining parts can get by following countless years, researchers can’t necessarily figure out the large number of morphological elements they see to conclusively characterize the remaining parts as Homo sapiens, or as various types of human species.

In 1924 the Taung Child, an australopithecine baby was found in a cavern. the Taung Child was a bipedal human predecessor, a momentary structure among gorillas and people. During the 1960s and 1970s, hundreds of fossils were found in East Africa in the districts of the Olduvai Gorge and Lake Turkana.

The nearest living members of humans are bonobos and chimpanzees and gorillas. With the sequencing of both the human and chimpanzee genome, starting around 2012 evaluations of the comparability between their DNA groupings range somewhere in the range of 95% and almost 99%. The earliest individual from the class Homo will be Homo habilis which advanced around 2.8 million years back. Homo habilis is the principal species for which we have positive proof of the utilization of stone tools.

The most established recuperated DNA of an early human relative comes from Sima de los Huesos. At the lower part of a cavern in Spain’s Atapuerca mountains, researchers found a huge number of teeth and bones from 28 distinct people who some way or another wound up gathered all at once. The scientists propose that a typical ancestor lived at some point somewhere in the range of 550,000 and 750,000 years back.

Humans have taken a jump in tools with the Middle Stone Age nearly 300,000 years back by making those finely created tools with chipped points and joining them to handles and spear shafts to further develop hunting ability extraordinarily. The show focuses on those Potts and associates dated to 298,000 to 320,000 years of age in southern Kenya were an advancement that out of nowhere made it conceivable to kill every kind of tricky or perilous prey. By something like a long time back, thorned focuses were made of bone. Last year an assortment including refined stone sharp edges was found close to Chennai, India, and dated to something like a long time back. By around 3.3 million years back, some hominins were making and involving straightforward stone curios in eastern Africa. The instrumental tools include crude sleds, anvils, and cutting tools, etc.

Humans are being evolved gradually, the course of development includes a progression of changes that can make those species either adjust to the ongoing climate or become wiped out. Charles Darwin’s – ‘On the Origin of Species, in which he composes his hypotheses of evolution by natural selection, is one of the main works of logical concentrate at any point distributed. Development is viewed as the consequence of changes that are being made in the genetic material of people Ardipithecus was perhaps the earliest ancestor. 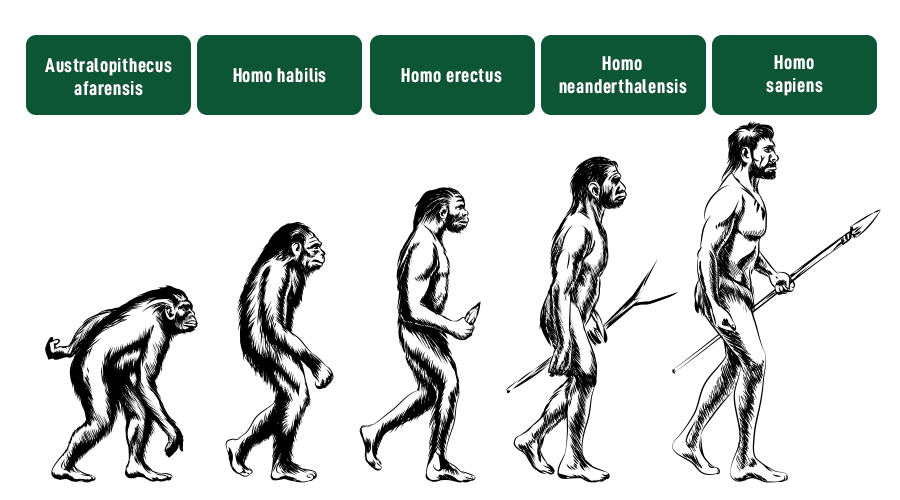 Dryopithecus is from Europe 12.5 to 11 million years ago (Mya). Being the earliest known ancestor of man is thought of. It is found in 1856, they were additionally tracked down in certain pieces of Africa, Asia, and Europe. Dryopithecus relocated south from Europe or Western Asia into Africa. It has been realized that the evolution of man started with him.

Homo habilis lived around 1.4 Ma.to 2.8 million years ago. The name homo habilis in Latin signifies ‘handyman’. They made tools from stone and bones which got the name. They were upstanding. Homo habilis was adjusted to living on trees.

Homo erectus was found in 1891, on the Indonesian island of Java. They used to possess a bigger brain and they are upstanding. Additionally, may have utilized fire to cook meat. Homo erectus lived around 1.8 million years to a long time back. Homo erectus utilized instrument tools including quartz, made of bones and wood. Homo erectus are cave occupants, they have diminished intestinal length and they are in a bigger populace.

They lived around 400,000 to 28,000 years ago, in Europe and Asia. Neanderthals additionally possessed altogether bigger brains and weight. Neanderthal variation to cold conditions. Likewise, they had an enormous head and jaw and were exceptionally strong and solid. They were carnivores and the instrument tools from the period demonstrate they were trackers. They were likewise cave occupants yet their caverns were more agreeable and they lived in gatherings and chased after food gatherings.

Homo sapiens is the early modern humans. The word sapiens is Latin which signifies ‘wise’ or ‘smart’. Home sapiens had fostered the power of thinking unlike Neanderthals and stone tools advancements created. They were omnivorous and had the option to deliver workmanship. Their brain size was diminished to 1300 cc. The jaws are very diminished and the skull was adjusted, and the jaw showed up. They assembled food through hunting.

Question 1: Who developed the first tools?

Homo Habilis was the first man to foster tools. This species of human addresses a halfway stage between the Australopithecus and Pithecanthropus erectus. The name homo habilis in Latin signifies ‘handyman’. They made tools from stone and bones which got the name. They were upstanding. Homo habilis was adjusted to living on trees.

Question 2: What are the features of the Peking man?

Question 3: Who is Homo sapiens?

Homo sapiens are the main species on our earth which is the consequence of more than 7 million years of evolution. The word sapiens is Latin which signifies ‘wise’ or ‘smart’. They were omnivorous and had the option to deliver workmanship. Their brain size was diminished to 1300 cc.

Question 4: Give some discoveries of ancient human fossils.

Here some of the discoveries of ancient human fossils are

Question 5: What are the stages in Human evolution?

Question 6: What order does a human belong to?

Humans have a place with the family which is known as the Hominidae of the order Primates. Apes like people additionally have a place with the exact order that is Primates. With the progression of time, the precursors of this order developed and they began turning out to be increasingly unique. It is accepted that the very first predecessors of people started in Africa and in the end, moved towards Asia, Europe, and the remainder of the world.

Homo Neanderthalensis are cave inhabitants and they made stone instrumental tools and weapons. There was likewise proof of the utilization of fire. They are gigantic and long and have level topped skulls. The forehead was subsiding with weighty brow ridges. The jaws were distending yet the jawline was retreating and they had huge teeth. The period is assessed about 100,000 years back.