It is the sequence of terms having the same difference between the consecutive terms. For example, consider a ladder, its rungs are in descending order i.e. biggest at the bottom and smallest at the top. As shown, the lengths of rungs are (64, 60, 56, 52, 48, 44, 40) cm starting from the bottom. 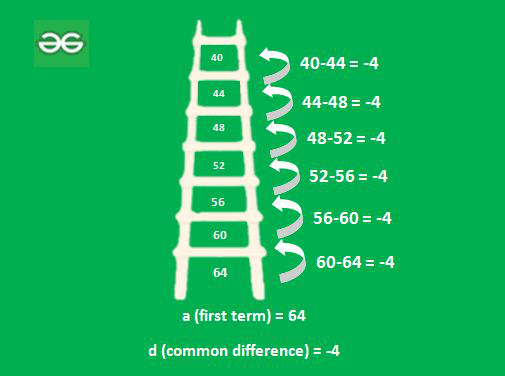 It can be seen that, there’s a common difference of -4 in all the terms therefore, it’s an AP. Now,

By using AP, properties of sum are obtained,

Here ∑ is read as Sigma and it means summation.

It is an AP with

Similarly, by using Binomial Expansion following results can be achieved

Evaluate the given sum:

property of addition where u is the upper limit and l represents the lower limit is used as :

Step 2: Constant values 4 and 100 are taken out as common respectively because

Step 3: In the 3rd step, results of sum of first n and squares of first n Natural Numbers are used and the value of k is put 30 because summation is ranging from 1-30 and then it is simply solved.

Question 1: Use the properties and formulas to evaluate the given sum,

Question 2: Use the properties and formulas to evaluate the given sum,