Ethernet Adapter or Network Interface Card (NIC) is hardware device/component, that enables you to send and receive data, to and from your computer. It will be connected to the network via wired or wireless connection.

The reason why Manchester Encoding technique is employed – Ethernet cable is connected through port, to Ethernet Adapter. So, application layer data is given to transport layer and is forwarded to network layer and then it comes to data link layer (where NIC card is present now).

So, frames that are created by host computer, need to be placed on Ethernet cable (on channel). When host computer, wants to place data/information on channel, we want to use some encoding technique.

Encoding is vital to convert particular data/frames, created by host computer, into signals because Ethernet cable For example, copper cable carries data in form of electric signals) will only carry signals.

The reason why host computer needs to send 96 bits: host computer should send 32-bit jamming sequence to point collision went on and just 32 bits is insufficient. Hence, it must append 64-bit preamble.

Runt Frame :
We know that Ethernet will not create any frame that is less than minimum length of 64 bytes. It can be seen that runt frames are commonly caused by collisions. When 2 frames collide, it leads to collision, giving rise to “Runt frame”.

The other causes of runt frames are : 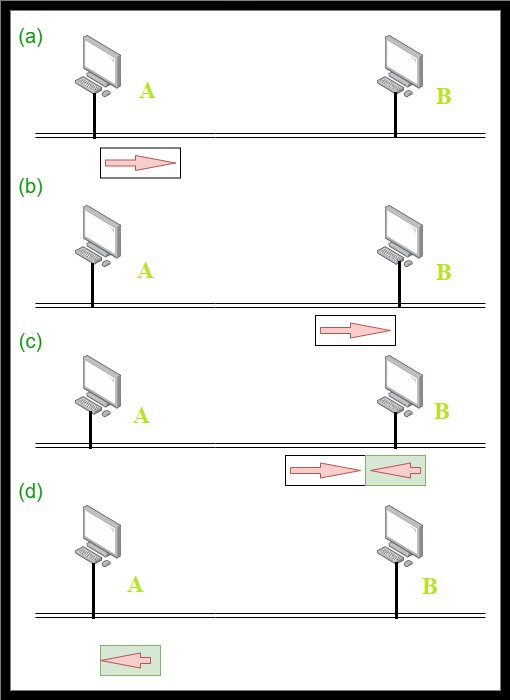 Let us assume that there are 200 bits in frame and, all bits are transmitted and received by ‘B’, except last bit. Time at which last bit is received by ‘B’, is same time at which ‘B’ begins its transmission. Because of this, single bit collision occurs. Here, when ‘B’ begins transmission at ‘t1+d1’, frame from ‘A’, arrives at ‘B’ at the same time i.e ‘t1+d1’. Hence, both frames become unusable. This frame becomes runt frame. Time at which ‘B’ starts transmitting frames is ‘t1+d1’, and therefore time at which frames reach ‘A’ is ‘t1+d1+d1’ = ‘t1+2d1’.