Epithelial tissue is what makes up this part of the animal’s anatomy, and it may be found on both the outside and the inside of the body. The body structure of multicellular organisms is more complicated than that of unicellular organisms, in which every important cellular function, such as nutrition, breathing, elimination, and so on, is carried out by a single cell. In these types of creatures, several groupings of cells, each of which performs a unique function, are meticulously arranged into tissues, organs, and organ systems that carry out their jobs in a synchronised way.

A few of the types of animal tissue known as epithelial tissue, also known as epithelium (from the Greek words epi- upon and thele- nipple), is described as being one of the tissues that cover both the interior and exterior surfaces of an animal’s body. It is made up of a layer of closely packed cells with a minimal amount of intercellular material and is supported by a membrane that is not cellular and acts as a foundation. 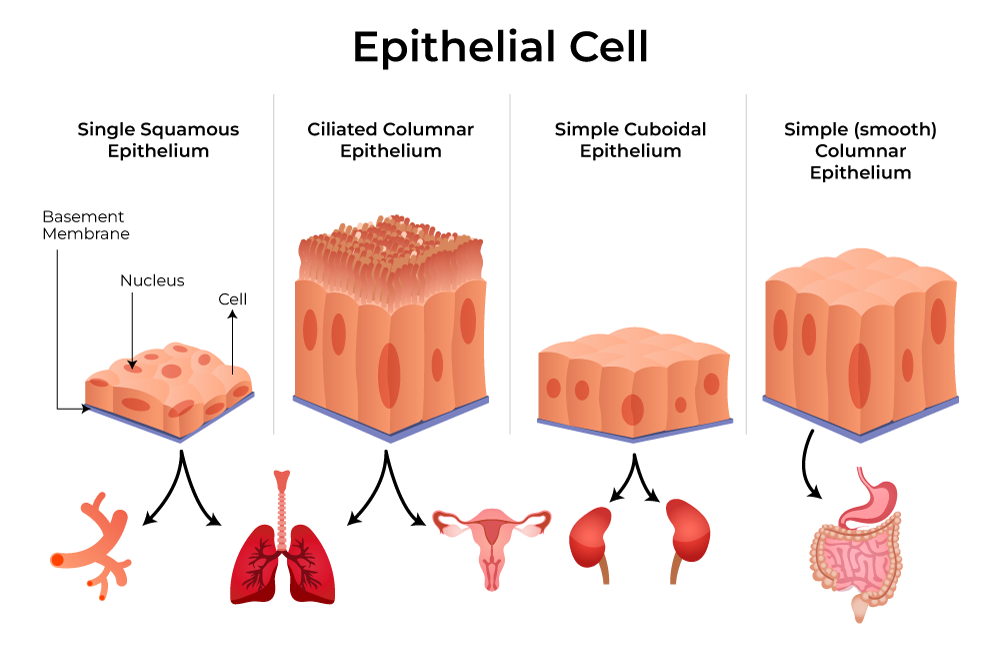 Characteristics of Epithelial Cells and Tissues

The following is a list of properties that epithelial tissues have

The following is a list of the intercellular connections that are typical of epithelial cells and may be found between them:

The epithelial tissues may be roughly divided into three categories, which are as follows:

It was divided into subsequent types:

It is formed from only one layer of polygon cells that have been flattened and packed closely together in close proximity to one another. There are many different kinds of junctions, but tight junctions are the ones that are most important in holding the cells together. The pavement epithelium is another name for this kind of epithelium, which appears like tiles across a floor.

Locations: Where it may be found include the alveoli of the lungs, the pericardial cavity, the abdominal cavity, and the lining of numerous components of the blood circulatory system. Preservation, evacuation, gaseous exchange, and the secretion of coelomic fluid are the functions of this organ.

On top of the basement membrane, it consists a single layer of cells that are cube-shaped and is made up of these cells. The nucleus or core of the cell may be thought of as a sphere and can be found in the middle of the cell. It’s possible for the free surfaces of the cells to be plain or to have microvilli, which are structures that enhance the surface area. Preservation, intake, elimination, and the generation of gametes are the functions of this organ.

It is made up of a single layer of cells that are all stretched and positioned in the same vertical direction as one another. Near the bottom of the cell sits a solitary nucleus that may be described as either oval or elongated. Goblet cells, which are a subset of its cells, are responsible for the production of mucous. These cells may be found in many parts of the respiratory system.

Ciliated Epithelium that Is Simplified

On its surface layer, it carries cilia, which are projections that transport materials in a certain orientation across the epithelium. It is located above the basement membrane at its location. Once again, there are two different classes:

Pseudostratified Epithelium of the Endothelium

It is just one cell thick; yet, it gives the appearance of having two layers because not all of the cells extend to the free surface. Be a result of the cells’ attachment to the basement membrane, the structure is referred to as pseudostratified. Again, there are two categories:

There are two distinct categories of it:

It is made up of numerous layers of cells and has been classified into four categories that follow according to the morphology of the cells that are found in the surface layers:

The cells that make up the germinal epithelium are columnar or cuboidal in shape, and their nuclei are oval in shape. There is a possibility that the basal layer of the tissue contains these cells. Mitosis is the process through which the cells continually reproduce themselves to make new cells.  In addition to this, it is split into the following 2  types

Cuboidal stratification of the epithelium

Columnar epithelium that is stratified and ciliated

Epithelium Composed of Transitional Compounds
It is composed of more than 1 layer of cells, but in comparison to the stratified epithelium that covers the majority of the system, it is far less dense and more elastic. It has cells that are cuboidal at its base, 2 or 3 layers of huge polygonal or pear-shaped cells in the centre, and a surface layer of massive, wide, rectangular, or oval cells.
Spot: It may be found on the inside surface of the renal pelvis, the ureter, and the urinary bladder.

Epithelial Tissues That Are Specialized

This epithelial tissue is specialized to execute certain duties, and as a result, its structures are similarly specialised for this purpose. Several examples of these are as follows:

This epithelium may be found in the bottom-most layer of the retina, the iris, and the layer of the skin that carries pigment.

Question 1: How can epithelial tissue be recognized when seen using a microscope?

Question 2: Can you give me two instances of epithelial tissues?

Question 4: What roles does epithelial tissue play in the body?