Emotion Detection is one of the hottest topics in research nowadays. Emotion sensing technology can facilitate communication between machines and humans. It will also help to improve the decision-making process. Many Machine Learning Models have been proposed to recognize emotions from the text. But, in this article, our focus is on the Bidirectional LSTM Model. Bidirectional LSTMs in short BiLSTM is an addition to regular LSTMs which is used to enhance the performance of the model on sequence classification problems. BiLSTMs use two LSTMs to train on sequential input. The first LSTM is used on the input sequence as it is. The second LSTM is used on a reversed representation of the input sequence. It helps in supplementing additional context and makes our model fast.

The dataset which we have used is ISEAR (The International Survey on Emotion Antecedents and Reactions). Here, is a glimpse of the dataset.

ISEAR dataset contains 7652 sentences. It has a total of seven sentiments which are- Joy, Fear, Anger, Sadness, Guilt, Shame, and Disgust.

Let’s go step by step in making the model which will predict emotion.

Step 2: Next step is to load the dataset from our machine and preprocess it. In the dataset, there are some rows that contain -‘No response’. This sentence is completely useless for us. So, we will drop such rows.

Read the dataset and preprocess it

Step 3:  Apply a word tokenizer to convert each sentence into a list of words. Example: If there is a sentence- ‘I am happy’. Afterward tokenizing it will get converted into a list [‘I’,’am’,’happy’].

The output of the above code snippet is this:

The output of word tokenized

The output of the above code snippet is this:

The glove vector contains almost all words of the English dictionary.

Here’s some insight into the glove vector.

The first word of each row is the character that is to be embedded. And from the column to the last column, there is the numeric representation of that character in a 50d vector form.

Here, in the above example, the dictionary formed i.e embeddings_index contains the word and its corresponding 50d vector, to visualize it let’s print the 50 dimensions of the word -‘happy’.

Step 6: Now, we are done with all the preprocessing part, and now we need to perform the following things:

This is the diagram of the proposed model :

Here, the dimension of input is 100 X 50 where 100 is the number of words in each input sentence of the dataset and 50 represents the mapping of each word in a 50d vector.

The output of Bidirectional(LSTM) is 200 because above we have defined dimensionality of output space to be 100. As it a BiLSTM model, so dimensionality will be 100*2 =200, as a BiLSTM contains two LSTMs layers- one forward and the other backward.

After this dropout layer is added to prevent overfitting. And at last dense layer is applied to convert the 200 output sequences to 7, as we have only 7 emotions, so the output should be of seven dimensions only. 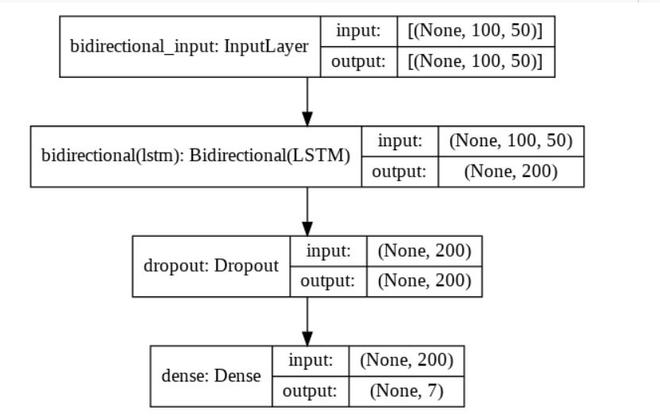 This is the accuracy when we test the model.