Electromagnetic induction, often known as induction, is a process in which a conductor is placed in a certain position and the magnetic field varies or remains stationary as the conductor moves. A voltage or EMF (Electromotive Force) is created across the electrical conductor as a result of this. In 1830, Michael Faraday discovered the Law of Induction. Let’s take a closer look at Electromagnetic Induction.

Assume you go cashless when shopping and your parents utilize credit cards. The card is always scanned or swiped by the shopkeeper. The shopkeeper does not photograph or touch the card. However, he swipes/scans it. How does this swiping of the card remove money? This is due to a phenomenon known as ‘Electromagnetic Induction.’

Is it possible for moving things to generate electric currents? How can you tell whether there’s a connection between electricity and magnetism? Consider what life would be like if there were no computers, phones, or electricity. Faraday’s experiments resulted in the development of generators and transformers. 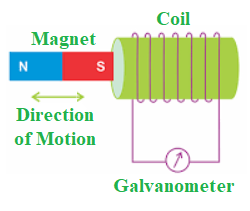 Michael Faraday discovered this electromagnetic induction rule. He put up a leading wire similar to the diagram above, which he linked to a device that measured the voltage across the circuit. The voltage in the circuit is measured when a bar magnet passes through the device. The significance of this is that it is a method of creating electrical energy in a circuit by employing magnetic fields rather than batteries. The principle of electromagnetic induction is used by devices such as generators, transformers, and motors. 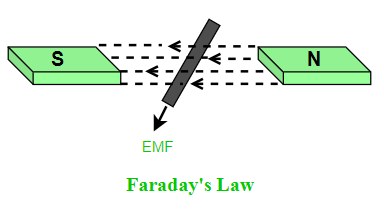 Second Law: The magnitude of the induced EMF is equal to the flux change rate.

Faraday discovered that various elements impact the generation of voltage through his experiment. They are as follows:

Therefore, Faraday’s law of electromagnetic induction, states that the amount of voltage generated in a coil is proportionate to the changing magnetic field and the number of turns of the coil.

As a result, the induced voltage is now:

Lenz’s Law states that when an emf induces according to Faraday’s law, the polarity (direction) of that induced emf opposes the cause of its creation.

According to Lenz’s law,

The negative sign indicates that the induced emf opposes the cause of its production.

The production of alternating current is one of the most important applications of electromagnetic induction. 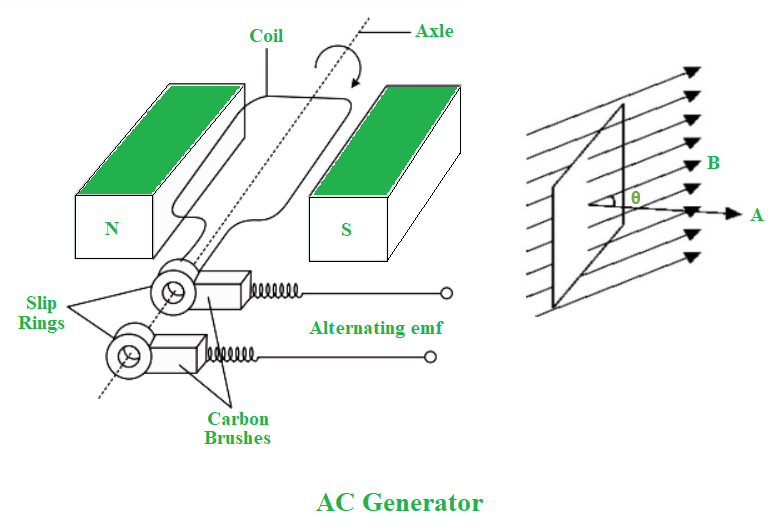 More advanced equipment is the AC generator with a 100 MV output capacity. The effective area of the loop when the coil spins in a magnetic field B equals A cos θ, where θ is the angle between A and B. The principle of operation of a basic ac generator is this way of creating a flux change. The axis of the rotating coil is perpendicular to the magnetic field direction. The magnetic flux across the coil changes as the coil rotates, causing an emf to induct in the coil.

Problem 1: When a bar magnet is placed near to the circular coil having 50 turns, the magnetic field density changes at a rate of 0.10 T ⁄ s. Find the emf induced in the coil.

Hence, the emf induced in the coil is 5 V.

Problem 2: What is electromagnetic induction?

Problem 3: What is Faraday’s Law of electromagnetic induction?

Faraday’s law of electromagnetic induction, states that the amount of voltage generated in a coil is proportionate to the number of turns and the changing magnetic field of the coil.

Problem 4: What is Lenz’s law?