Gauss law is a very important part of electromagnetism and physics. It is used to relate the distribution of charge with the resulting electric field due to the charge. This law was formulated by Joseph Lagrange in 1773, followed by Carl Gauss in 1813. Both of them formulated this law in the context of the attraction of ellipsoids. This law is also included in one of Maxwell’s four equations which form the basis for classical electrodynamics. Let’s study this concept in detail.

If the area is tilted by an angle θ, it becomes,

The flux is denoted by

Consider a small charge “q” kept inside a sphere of the radius r. This sphere can be divided into smaller area elements as shown in the figure below. The electric field passing through that element will be given as, 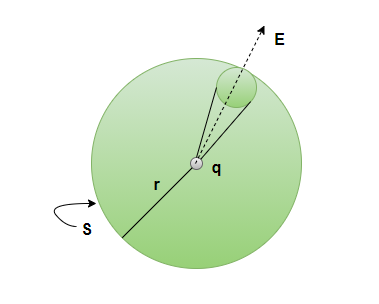 The total flux can be calculated by adding flux through individual elements,

Now, the total area of the sphere will be

This is the general result of Gauss’ law.

The total flux along a closed surface S, enclosing a charge q is,

Gauss’s law can be used to derive the equations for an electrical field through a variety of charged shapes. Consider an infinitely long wire containing the charge. The charge per unit length of that wire is given by

. The wire has an axis of symmetry that is shown in the figure below. The goal is to derive the equation for calculating the electric field produced by this wire. 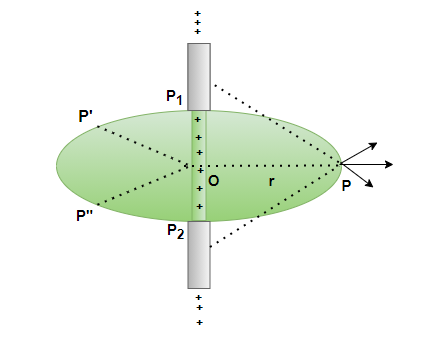 Suppose a radial vector OP is taken and it is rotated around the wire. This means that the electric field must have the same value at all the points P, P’ and P”. The direction of the electric field is radially outwards if the charge is positive and vice-versa. 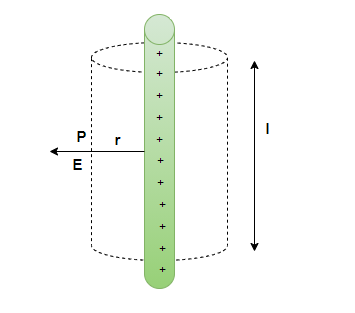 To calculate the electric field, imagine a cylindrical Gaussian surface. Since the field is radial everywhere, flux along the two faces of the cylinders is zero. On the cylindrical part of the surface, E is perpendicular to the surface at each point and its magnitude is constant since it depends only on r. The surface area of the curved part is

where l is the length of the cylinder.

The surface encloses a charge equal to

Let’s look at some sample problems.

Question 1: In Gauss’ law, the point charge inside the closed surface must be distributed in,

According to gauss’s law, the flux coming out of the enclosed shell only depends on the quantity of charge enclosed inside the shell.

It can be distributed arbitrary.

Question 4: Find the electric field at 5m from an infinitely long wire with a linear charge density of 5 x 10-3C/m.

Question 5: Find the electric field at 1m from an infinitely long wire with a linear charge density of 2 x 10-3C/m.